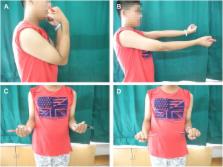 Acute unstable complex radial head and neck fractures in adults are seldom reported in the literature. Early recognition and appropriate management are essential to prevent long-term consequences of the loss of elbow function, forearm rotation, and chronic pain. Here, we describe an unusual case of a 20-year-old man who exhibited acute unstable complex fractures of the head and neck of the right radius without other injuries or comorbidity. An open reduction and mini T-shaped plate fixation were performed within 3 hours after injury, and the results were satisfactory. A long plaster fixation was continued for 3 weeks. A gradual mobilization was started after the removal of the plaster under the supervision of a physiotherapist. At the 12-month follow-up, no complications associated with the use of the mini T-shaped plate were noted, and the Mayo Elbow Performance Score was 97 (excellent). To our knowledge, acute unstable complex radial head and neck fractures in adults can be successfully treated with a mini T-shaped plate reconstruction technique.

Arthroplasty with a metal radial head for unreconstructible fractures of the radial head.

Nicholas King,  J Moro,  Joy C. MacDermid … (2001)
Treatment of unreconstructible comminuted fractures of the radial head remains controversial. There is limited information on the outcome of management of these injuries with arthroplasty with a metal radial head implant. The functional outcomes of arthroplasties with a metal radial head implant for the treatment of twenty-five displaced, unreconstructible fractures of the radial head in twenty-four consecutive patients (mean age, fifty-four years) were evaluated at a mean of thirty-nine months (minimum, two years). There were ten Mason type-III and fifteen Mason-Johnston type-IV injuries. Two of these injuries were isolated, and twenty-three were associated with other elbow fractures and/or ligamentous injuries. At the time of follow-up, Short Form-36 (SF-36) summary scores suggested that overall health-related quality of life was within the normal range (physical component = 47 +/- 10, and mental component = 49 +/- 13). Other outcome scales indicated mild disability of the upper extremity (Disabilities of the Arm, Shoulder and Hand score = 17 +/- 19), wrist (Patient-Rated Wrist Evaluation score = 17 +/- 21 and Wrist Outcome Score = 60 +/- 10), and elbow (Mayo Elbow Performance Index = 80 +/- 16). According to the Mayo Elbow Performance Index, three results were graded as poor; five, as fair; and seventeen, as good or excellent. The poor and fair outcomes were associated with concomitant injury in two patients, a history of a psychiatric disorder in three, comorbidity in two, a Workers' Compensation claim in two, and litigation in one. Subjective patient satisfaction averaged 9.2 on a scale of 1 to 10. Elbow flexion of the injured extremity averaged 140 degrees +/- 9 degrees; extension, -8 degrees +/- 7 degrees; pronation, 78 degrees +/- 9 degrees; and supination, 68 degrees +/- 10 degrees. A significant loss of elbow flexion and extension and of forearm supination occurred in the affected extremity, which also had significantly less strength of isometric forearm pronation (17%) and supination (18%) as well as significantly less grip strength (p < 0.05). Asymptomatic bone lucencies surrounded the stem of the implant in seventeen of the twenty-five elbows. Valgus stability was restored, and proximal radial migration did not occur. Complications, all of which resolved, included one complex regional pain syndrome, one ulnar neuropathy, one posterior interosseous nerve palsy, one episode of elbow stiffness, and one wound infection. Patients treated with a metal radial head implant for a severely comminuted radial head fracture will have mild-to-moderate impairment of the physical capability of the elbow and wrist. At the time of short-term follow-up, arthroplasty with a metal radial head implant was found to have been a safe and effective treatment option for patients with an unreconstructible radial head fracture; however, long-term follow-up is still needed.

Radial head reconstruction versus replacement in the treatment of terrible triad injuries of the elbow.

Warren B Leigh,  Craig Ball (2012)
Dislocation of the elbow with associated fractures of the radial head and the coronoid process of the ulna have been referred to as the terrible triad of the elbow because of the difficulties in treating this injury and the poor outcomes. There were 23 patients (24 elbows) available for evaluation with this injury during a 7-year period at Auckland City Hospital. There were 11 women and 12 men with an average age of 43.5 years. The mean duration of follow-up was 41 months. The mean range of flexion was 135° (range, 110°-145°), extension was 8° (range, 0°-40°), supination was 75° (range, 15°-85°), and pronation was 80° (range, 20°-90°). No patients reported ongoing symptoms of instability. We compared the radial head repair group (13 patients) and the radial head replacement group (11 patients), which showed no significant difference between the variables of age, length of follow-up, American Shoulder and Elbow Surgeons score, satisfaction score, range of motion (flexion, extension, supination, pronation), and the associated arcs of motion. Only one significant difference was noted: the radial head replacement group scored higher values on the Disabilities of Arm, Shoulder, and Hand assessment. Elbow fracture-dislocations are difficult injuries to treat. Our study shows that with operative repair or replacement of the radial head to restore stability through radiocapitellar contact, coronoid, and lateral ligament repair, good range of movement and stability can be achieved at short-term follow-up. Copyright © 2012 Journal of Shoulder and Elbow Surgery Board of Trustees. Published by Mosby, Inc. All rights reserved.

D H Duckworth,  P. Walmsley,  M Will … (2011)
The purpose of this study was to determine the functional outcomes and predictive factors of radial head and neck fractures. Over an 18-month period, we performed a prospective study of 237 consecutive patients with a radiographically confirmed proximal radial fracture (156 radial head and 81 radial neck). Follow-up was carried out over a 1-year period using clinical and radiologic assessment, including the Mayo Elbow Score (MES). Multivariate regression analysis was used to determine significant predictors of outcome according to the MES. Of the 237 patients enrolled in the study, 201 (84.8%) attended for review, with a mean age of 44 years (range, 16-83 years; standard deviation, 17.3). One hundred eighty-seven (93%) patients achieved excellent or good MESs. The mean MES for Mason type-I (n = 103) and type-II (n = 82) fractures was excellent, with only two patients undergoing surgical intervention. For Mason type-III (n = 11) and type-IV (n = 5) fractures, the flexion arc, forearm rotation arc, and MES in the nonoperatively treated patients were not significantly different (all p ≥ 0.05) from those managed operatively. Regression analysis revealed that increasing age, increasing fracture complexity according to the AO-OTA classification, increasing radiographic comminution, and operative treatment choice were independently significant predictors of a poorer outcome (all p < 0.05). A majority of radial head and neck fractures can be treated nonoperatively, achieving excellent or good results. Age, fracture classification, radiographic comminution, and treatment choice are important factors that determine recovery.