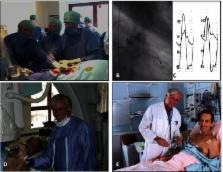 A prospective survey of patients with valvular heart disease in Europe: The Euro Heart Survey on Valvular Heart Disease.

Eric G Butchart,  Gabriel Baron,  Eric Boersma … (2003)
To identify the characteristics, treatment, and outcomes of contemporary patients with valvular heart disease (VHD) in Europe, and to examine adherence to guidelines. The Euro Heart Survey on VHD was conducted from April to July 2001 in 92 centres from 25 countries; it included prospectively 5001 adults with moderate to severe native VHD, infective endocarditis, or previous valve intervention. VHD was native in 71.9% of patients and 28.1% had had a previous intervention. Mean age was 64+/-14 years. Degenerative aetiologies were the most frequent in aortic VHD and mitral regurgitation while most cases of mitral stenosis were of rheumatic origin. Coronary angiography was used in 85.2% of patients before intervention. Of the 1269 patients who underwent intervention, prosthetic replacement was performed in 99.0% of aortic VHD, percutaneous dilatation in 33.9% of mitral stenosis, and valve repair in 46.5% of mitral regurgitation; 31.7% of patients had > or =1 associated procedure. Of patients with severe, symptomatic, single VHD, 31.8% did not undergo intervention, most frequently because of comorbidities. In asymptomatic patients, accordance with guidelines ranged between 66.0 and 78.5%. Operative mortality was <5% for single VHD. This survey provides unique contemporary data on characteristics and management of patients with VHD. Adherence to guidelines is globally satisfying as regards investigations and interventions.

Duolao Wang,  G Fontana,  Raphael Ritson-Williams … (2012)
The Placement of Aortic Transcatheter Valves (PARTNER) trial showed that among high-risk patients with aortic stenosis, the 1-year survival rates are similar with transcatheter aortic-valve replacement (TAVR) and surgical replacement. However, longer-term follow-up is necessary to determine whether TAVR has prolonged benefits. At 25 centers, we randomly assigned 699 high-risk patients with severe aortic stenosis to undergo either surgical aortic-valve replacement or TAVR. All patients were followed for at least 2 years, with assessment of clinical outcomes and echocardiographic evaluation. The rates of death from any cause were similar in the TAVR and surgery groups (hazard ratio with TAVR, 0.90; 95% confidence interval [CI], 0.71 to 1.15; P=0.41) and at 2 years (Kaplan-Meier analysis) were 33.9% in the TAVR group and 35.0% in the surgery group (P=0.78). The frequency of all strokes during follow-up did not differ significantly between the two groups (hazard ratio, 1.22; 95% CI, 0.67 to 2.23; P=0.52). At 30 days, strokes were more frequent with TAVR than with surgical replacement (4.6% vs. 2.4%, P=0.12); subsequently, there were 8 additional strokes in the TAVR group and 12 in the surgery group. Improvement in valve areas was similar with TAVR and surgical replacement and was maintained for 2 years. Paravalvular regurgitation was more frequent after TAVR (P<0.001), and even mild paravalvular regurgitation was associated with increased late mortality (P<0.001). A 2-year follow-up of patients in the PARTNER trial supports TAVR as an alternative to surgery in high-risk patients. The two treatments were similar with respect to mortality, reduction in symptoms, and improved valve hemodynamics, but paravalvular regurgitation was more frequent after TAVR and was associated with increased late mortality. (Funded by Edwards Lifesciences; ClinicalTrials.gov number, NCT00530894.).

Hélène Eltchaninoff,  Nicolas Borenstein,  Martin Leon … (2002)
The design of a percutaneous implantable prosthetic heart valve has become an important area for investigation. A percutaneously implanted heart valve (PHV) composed of 3 bovine pericardial leaflets mounted within a balloon-expandable stent was developed. After ex vivo testing and animal implantation studies, the first human implantation was performed in a 57-year-old man with calcific aortic stenosis, cardiogenic shock, subacute leg ischemia, and other associated noncardiac diseases. Valve replacement had been declined for this patient, and balloon valvuloplasty had been performed with nonsustained results. With the use of an antegrade transseptal approach, the PHV was successfully implanted within the diseased native aortic valve, with accurate and stable PHV positioning, no impairment of the coronary artery blood flow or of the mitral valve function, and a mild paravalvular aortic regurgitation. Immediately and at 48 hours after implantation, valve function was excellent, resulting in marked hemodynamic improvement. Over a follow-up period of 4 months, the valvular function remained satisfactory as assessed by sequential transesophageal echocardiography, and there was no recurrence of heart failure. However, severe noncardiac complications occurred, including a progressive worsening of the leg ischemia, leading to leg amputation with lack of healing, infection, and death 17 weeks after PHV implantation. Nonsurgical implantation of a prosthetic heart valve can be successfully achieved with immediate and midterm hemodynamic and clinical improvement. After further device modifications, additional durability tests, and confirmatory clinical implantations, PHV might become an important therapeutic alternative for the treatment of selected patients with nonsurgical aortic stenosis.

This is an open access article distributed under the terms of the Creative Commons Attribution license CC BY 4.0, which permits unrestricted use, distribution and reproduction in any medium, provided the original work is properly cited.