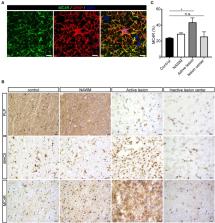 To date, available treatment strategies for multiple sclerosis (MS) are ineffective in preventing or reversing progressive neurologic deterioration, creating a high, and unmet medical need. One potential way to fight MS may be by limiting the detrimental effects of reactive astrocytes, a key pathological hallmark for disease progression. One class of compounds that may exert beneficial effects via astrocytes are melanocortin receptor (MCR) agonists. Among the MCR, MC4R is most abundantly expressed in the CNS and several rodent studies have described that MC4R is—besides neurons—expressed by astrocytes. Activation of MC4R in astrocytes has shown to have potent anti-inflammatory as well as neuroprotective effects in vitro, suggesting that this could be a potential target to ameliorate ongoing inflammation, and neurodegeneration in MS. In this study, we set out to investigate human MC4R expression and analyze its downstream effects. We identified MC4R mRNA and protein to be expressed on astrocytes and observed increased astrocytic MC4R expression in active MS lesions. Furthermore, we show that the novel, highly selective MC4R agonist setmelanotide ameliorates the reactive phenotype in astrocytes in vitro and markedly induced interleukin−6 and −11 production, possibly through enhanced cAMP response element-binding protein (CREB) phosphorylation. Notably, stimulation of human macrophages with medium from astrocytes that were exposed to setmelanotide, skewed macrophages toward an anti-inflammatory phenotype. Taken together, these findings suggest that targeting MC4R on astrocytes might be a novel therapeutic strategy to halt inflammation-associated neurodegeneration in MS.

Daphne YS Vogel,  Elly JF Vereyken,  Judith E Glim … (2013)
Background Macrophages play a dual role in multiple sclerosis (MS) pathology. They can exert neuroprotective and growth promoting effects but also contribute to tissue damage by production of inflammatory mediators. The effector function of macrophages is determined by the way they are activated. Stimulation of monocyte-derived macrophages in vitro with interferon-γ and lipopolysaccharide results in classically activated (CA/M1) macrophages, and activation with interleukin 4 induces alternatively activated (AA/M2) macrophages. Methods For this study, the expression of a panel of typical M1 and M2 markers on human monocyte derived M1 and M2 macrophages was analyzed using flow cytometry. This revealed that CD40 and mannose receptor (MR) were the most distinctive markers for human M1 and M2 macrophages, respectively. Using a panel of M1 and M2 markers we next examined the activation status of macrophages/microglia in MS lesions, normal appearing white matter and healthy control samples. Results Our data show that M1 markers, including CD40, CD86, CD64 and CD32 were abundantly expressed by microglia in normal appearing white matter and by activated microglia and macrophages throughout active demyelinating MS lesions. M2 markers, such as MR and CD163 were expressed by myelin-laden macrophages in active lesions and perivascular macrophages. Double staining with anti-CD40 and anti-MR revealed that approximately 70% of the CD40-positive macrophages in MS lesions also expressed MR, indicating that the majority of infiltrating macrophages and activated microglial cells display an intermediate activation status. Conclusions Our findings show that, although macrophages in active MS lesions predominantly display M1 characteristics, a major subset of macrophages have an intermediate activation status.