Household environment and symptoms of childhood acute respiratory tract infections in Nigeria, 2003–2013: a decade of progress and stagnation 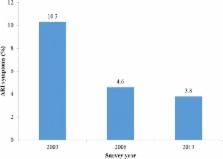 Acute respiratory infections (ARIs) remains a disease of public health importance in Nigeria. Though, previous studies have identified factors associated with childhood ARI symptoms, the progress made in reducing the burden of this major childhood morbidity in the past decade in Nigeria has not been quantified. Therefore, this study describes the trends in the prevalence and factors associated with ARI symptoms among under-five (U5) children in Nigeria between years 2003 and 2013.

A retrospective cross-sectional analysis of nationally representative data from the Nigeria Demographic and Health Surveys (NDHS) for years 2003, 2008 and 2013 was done. The study sample included women of reproductive age who had U5 children presenting with a cough accompanied with short rapid breaths in the last 2 weeks prior data collection. Data were analysed using complementary log regression model.

Though there has been a significant progress in the reduction of the prevalence of ARI symptoms between 2003 and 2013, the same could not be said of household environmental risk factors. Interventions to reduce the contributory effects of these factors to the occurrence of ARI symptoms should be instituted by government and other relevant stakeholders.

Epidemiology and etiology of childhood pneumonia.

Harry Campbell,  E. Mulholland,  Igor Rudan … (2008)
Childhood pneumonia is the leading single cause of mortality in children aged less than 5 years. The incidence in this age group is estimated to be 0.29 episodes per child-year in developing and 0.05 episodes per child-year in developed countries. This translates into about 156 million new episodes each year worldwide, of which 151 million episodes are in the developing world. Most cases occur in India (43 million), China (21 million) and Pakistan (10 million), with additional high numbers in Bangladesh, Indonesia and Nigeria (6 million each). Of all community cases, 7-13% are severe enough to be life-threatening and require hospitalization. Substantial evidence revealed that the leading risk factors contributing to pneumonia incidence are lack of exclusive breastfeeding, undernutrition, indoor air pollution, low birth weight, crowding and lack of measles immunization. Pneumonia is responsible for about 19% of all deaths in children aged less than 5 years, of which more than 70% take place in sub-Saharan Africa and south-east Asia. Although based on limited available evidence, recent studies have identified Streptococcus pneumoniae, Haemophilus influenzae and respiratory syncytial virus as the main pathogens associated with childhood pneumonia.

Pneumonia: the leading killer of children.

Lyndsey A. Darrow,  Mitchel Klein,  W. Flanders … (2014)
Upper and lower respiratory infections are common in early childhood and may be exacerbated by air pollution. We investigated short-term changes in ambient air pollutant concentrations, including speciated particulate matter less than 2.5 μm in diameter (PM2.5), in relation to emergency department (ED) visits for respiratory infections in young children. Daily counts of ED visits for bronchitis and bronchiolitis (n = 80,399), pneumonia (n = 63,359), and upper respiratory infection (URI) (n = 359,246) among children 0-4 years of age were collected from hospitals in the Atlanta, Georgia, area for the period 1993-2010. Daily pollutant measurements were combined across monitoring stations using population weighting. In Poisson generalized linear models, 3-day moving average concentrations of ozone, nitrogen dioxide, and the organic carbon fraction of particulate matter less than 2.5 μm in diameter (PM2.5) were associated with ED visits for pneumonia and URI. Ozone associations were strongest and were observed at low (cold-season) concentrations; a 1-interquartile range increase predicted a 4% increase (95% confidence interval: 2%, 6%) in visits for URI and an 8% increase (95% confidence interval: 4%, 13%) in visits for pneumonia. Rate ratios tended to be higher in the 1- to 4-year age group compared with infants. Results suggest that primary traffic pollutants, ozone, and the organic carbon fraction of PM2.5 exacerbate upper and lower respiratory infections in early life, and that the carbon fraction of PM2.5 is a particularly harmful component of the ambient particulate matter mixture.