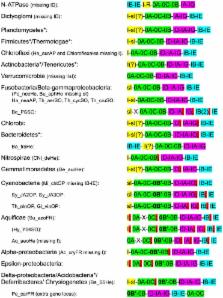 Bacteria and archaea are characterized by an amazing metabolic diversity, which allows them to persist in diverse and often extreme habitats. Apart from oxygenic photosynthesis and oxidative phosphorylation, well-studied processes from chloroplasts and mitochondria of plants and animals, prokaryotes utilize various chemo- or lithotrophic modes, such as anoxygenic photosynthesis, iron oxidation and reduction, sulfate reduction, and methanogenesis. Most bioenergetic pathways have a similar general structure, with an electron transport chain composed of protein complexes acting as electron donors and acceptors, as well as a central cytochrome complex, mobile electron carriers, and an ATP synthase. While each pathway has been studied in considerable detail in isolation, not much is known about their relative evolutionary relationships. Wanting to address how this metabolic diversity evolved, we mapped the distribution of nine bioenergetic modes on a phylogenetic tree based on 16S rRNA sequences from 272 species representing the full diversity of prokaryotic lineages. This highlights the patchy distribution of many pathways across different lineages, and suggests either up to 26 independent origins or 17 horizontal gene transfer events. Next, we used comparative genomics and phylogenetic analysis of all subunits of the F 0F 1 ATP synthase, common to most bacterial lineages regardless of their bioenergetic mode. Our results indicate an ancient origin of this protein complex, and no clustering based on bioenergetic mode, which suggests that no special modifications are needed for the ATP synthase to work with different electron transport chains. Moreover, examination of the ATP synthase genetic locus indicates various gene rearrangements in the different bacterial lineages, ancient duplications of atpI and of the beta subunit of the F 0 subcomplex, as well as more recent stochastic lineage-specific and species-specific duplications of all subunits. We discuss the implications of the overall pattern of conservation and flexibility of the F 0F 1 ATP synthase genetic locus.

Bacteria and archaea are the most primitive forms of life on Earth, invisible to the naked eye and not extremely varied or impressive in their appearance. Nevertheless, they are characterized by an amazing metabolic diversity, especially in the different processes they use to generate energy in the form of ATP. This allows them to persist in diverse and often extreme habitats. Wanting to address how this metabolic diversity evolved, we mapped the distribution of nine bioenergetic modes across all the major lineages of bacteria and archaea. We find a patchy distribution of the different pathways, which suggests either frequent innovations, or gene transfer between unrelated species. We also examined the F-type ATP synthase, a protein complex which is central to all bioenergetic processes, and common to most types of bacteria regardless of how they harness energy from their environment. Our results indicate an ancient origin for this protein complex, and suggest that different species, without necessitating major innovation, used their pre-existing ATP synthase and adapted it to work with different bioenergetic pathways. We also describe gene duplications and rearrangements of the ATP synthase subunits in different lineages, which suggest further flexibility and robustness in the control of ATP synthesis.

F. Abascal,  R Zardoya,  D Posada (2005)
Using an appropriate model of amino acid replacement is very important for the study of protein evolution and phylogenetic inference. We have built a tool for the selection of the best-fit model of evolution, among a set of candidate models, for a given protein sequence alignment. ProtTest is available under the GNU license from http://darwin.uvigo.es

Horizontal Transfer, Not Duplication, Drives the Expansion of Protein Families in Prokaryotes

Yael Artzy-Randrup,  Tal Dagan,  William Martin (2008)
Lateral gene transfer is an important mechanism of natural variation among prokaryotes, but the significance of its quantitative contribution to genome evolution is debated. Here, we report networks that capture both vertical and lateral components of evolutionary history among 539,723 genes distributed across 181 sequenced prokaryotic genomes. Partitioning of these networks by an eigenspectrum analysis identifies community structure in prokaryotic gene-sharing networks, the modules of which do not correspond to a strictly hierarchical prokaryotic classification. Our results indicate that, on average, at least 81 +/- 15% of the genes in each genome studied were involved in lateral gene transfer at some point in their history, even though they can be vertically inherited after acquisition, uncovering a substantial cumulative effect of lateral gene transfer on longer evolutionary time scales.

This research was supported by a Marie Curie Intra European Fellowship within the 7th European Community Framework Programme (FP7-PEOPLE-2011-IEF proposal N° 298890). The funders had no role in study design, data collection and analysis, decision to publish, or preparation of the manuscript.