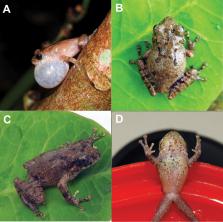 Raorchestes is a speciose genus of bush frogs with high diversity occurring in the Western Ghats of India. Relatively fewer species have been recorded across India, through Bangladesh, southern China, into Vietnam and Peninsular Malaysia. Many bush frogs are morphologically cryptic and therefore remain undescribed. Here, a new species, Raorchestes rezakhani sp. nov., is described from northeastern Bangladesh based on morphological characters, genetics, and bioacoustics. The 16S rRNA gene distinguished this species from 48 known species of this genus. Bayesian Inference and Maximum Likelihood analyses indicated that the new species was most similar to R. tuberohumerus , a species found in the Western Ghats, and to R. gryllus , a species found in Vietnam. Bioacoustics indicated that their calls were similar in pattern to most Raorchestes species, although number of pulses, duration of pulses, pulse intervals and amplitude differentiated it from a few other species. It is suggested that northeastern India, Bangladesh, northern Myanmar, and southern China represent important, relatively unexplored areas that could yield additional species of Raorchestes . Since many remaining habitat patches in Bangladesh are under severe threat from deforestation, efforts should be made to protect these last patches from further degradation.

Rohan Pethiyagoda,  Michel C. Milinkovitch,  Natalie Beenaerts … (2004)
The apparent biotic affinities between the mainland and the island in the Western Ghats-Sri Lanka biodiversity hotspot have been interpreted as the result of frequent migrations during recent periods of low sea level. We show, using molecular phylogenies of two invertebrate and four vertebrate groups, that biotic interchange between these areas has been much more limited than hitherto assumed. Despite several extended periods of land connection during the past 500,000 years, Sri Lanka has maintained a fauna that is largely distinct from that of the Indian mainland. Future conservation programs for the subcontinent should take into account such patterns of local endemism at the finest scale at which they may occur.