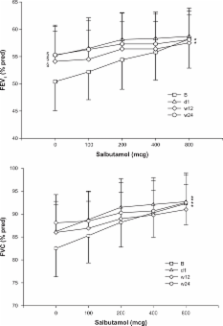 Use of short-acting β 2-agonists in chronic obstructive pulmonary disease (COPD) during treatment with long-acting β 2-agonists is recommended as needed, but its effectiveness is unclear. The purpose of this study was to assess the additional bronchodilating effect of increasing doses of salbutamol during acute and chronic treatment with formoterol in patients with COPD.

Ten patients with COPD underwent a dose-response curve to salbutamol (until 800 μg of cumulative dose) after a 1-week washout (baseline), 8 hours after the first administration of formoterol 12 μg (day 1), and after a 12-week and 24-week period of treatment with formoterol (12 μg twice daily by dry powder inhaler). Peak expiratory flow, forced expiratory volume in one second (FEV 1), forced vital capacity, and inspiratory capacity were measured at the different periods of treatment and at different steps of the dose-response curve.

J Milic-Emili,  A Duguet,  T Similowski … (1998)
Expiratory flow limitation (EFL), which promotes dynamic hyperinflation and increased work of breathing, often occurs in chronic obstructive pulmonary disease (COPD). The purpose of this study was to assess the effect of bronchodilators on EFL and end-expiratory lung volume in patients with moderate-to-severe COPD. EFL was assessed by applying negative expiratory pressure (NEP) at the mouth during tidal expiration. EFL was present when expiratory flow did not increase or increased only in the early phase of expiration with NEP. In 18 patients (age 65+/-2 yrs; forced expiratory volume in one second (FEV1)=45+/-4% predicted) pulmonary function tests and a series of NEP (-3.5 cmH2O) test breaths were performed at rest in a sitting position before and 20 min after inhalation of 400 microg of salbutamol. EFL was detected in 11 patients and persisted after salbutamol in all of these flow-limited (FL) patients. After bronchodilator administration FL patients exhibited a significant decrease in functional residual capacity (FRC) associated with an increase in inspiratory capacity (IC). In contrast, no changes in FRC and IC were observed in the seven non flow-limited (NFL) patients after administration of salbutamol. Except for one NFL patient, the other 17 patients (six NFL and 11 FL) had no reversibility of their bronchial obstruction (delta FEV1 <10% pred). In conclusion, patients with chronic obstructive pulmonary disease and expiratory flow limitation, even if nonresponders in terms of forced expiratory volume in one second, may benefit from bronchodilators because they can breathe, still in a flow-limited manner, at a lower lung volume.

A Veale,  T Lasserson,  M. Chan … (2005)
Chronic obstructive pulmonary disease (COPD) is characterised by partially reversible airflow limitation. Many patients have little reversibility to short acting bronchodilators, but long acting bronchodilators are frequently advocated. To determine the effectiveness of long acting beta-2 adrenoceptor agonists (LABAs) in COPD patients demonstrating poor reversibility to short-acting bronchodilators. The Cochrane Airways Group Specialised Register was searched ('all years' to 2005) along with the reference lists from identified randomised controlled trials (RCTs). All RCTs comparing inhaled LABAs (salmeterol or formoterol) with placebo in the treatment of patients with stable, poorly reversible COPD. Studies were a minimum of four weeks in duration. Two authors independently performed data extraction and study quality assessment. If we required additional data, we contacted authors and pharmaceutical companies sponsoring the identified RCTs. Twenty-three published and unpublished studies (6061 participants) were included in the review. There was a significant change in forced expiratory volume in 1 second (FEV1) in favour of salmeterol 50 mcg twice daily (BID) of 51 mls (95% confidence intervals (CI) 32 to 70), end of study morning peak expiratory flow (PEF) 14.89 L/min (95% CI 10.86 to 18.91). Supplemental short-acting bronchodilator usage was reduced by just under one puff per day. There were significant differences in the total, activity and impact domain scores of the St George's respiratory questionnaire in favour of salmeterol 50 mcg BID. Findings from other health status measurements and symptom scores were conflicting. There was no significant difference in exercise tolerance. The number of participants experiencing exacerbations was significantly reduced with salmeterol 50 mcg treatment compared with placebo (numbers needed to treat to benefit 21). This review shows that the treatment of patients with COPD with salmeterol 50 mcg produces modest increases in lung function. There were varying effects for other important outcomes such as health related quality of life or reduction in symptoms. However, there was a consistent reduction in exacerbations which may help people with COPD who suffer frequent deterioration of symptoms prompting healthcare utilisation. The strength of evidence for the use of salmeterol 100 mcg, formoterol 12 mcg, 18 mcg, 24 mcg was insufficient to provide clear indications for practice.

Formoterol in the management of chronic obstructive pulmonary disease

Paschalis Steiropoulos,  Argyris Tzouvelekis,  Demosthenes Bouros (2008)
Bronchodilators represent the hallmark of symptomatic treatment of Chronic Obstructive Pulmonary Disease (COPD). There are four categories of bronchodilators: anticholinergics, methylxanthines, short-acting β2-agonists, and long-acting β2-agonists such as formoterol. Significant research has been performed to investigate the efficacy, safety and tolerability of formoterol in the therapeutic field of COPD. Formoterol exhibits a rapid onset of bronchodilation similar to that observed with salbutamol, yet its long bronchodilatory duration is comparable to salmeterol. In addition, formoterol presents with a clear superiority in lung function improvement compared with either ipratropium bromide or oral theophylline, while its efficacy improves when administered in combination with ipratropium. Formoterol has been shown to better reduce dynamic hyperinflation, which is responsible for exercise intolerance and dyspnea in COPD patients, compared with other bronchodilators, whereas it exerts synergistic effect with tiotropium. Moreover, formoterol reduces exacerbations, increases days free of use of rescue medication and improves patients’ quality of life and disease symptoms. Formoterol has a favorable safety profile and is better tolerated than theophylline. Collectively, data extracted from multicenter clinical trials support formoterol as a valid therapeutic option in the treatment of COPD.