Nitazoxanide is active against Mycobacterium leprae 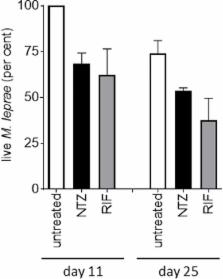 Nitazoxanide (NTZ) is an anti-parasitic drug that also has activity against bacteria, including Mycobacterium tuberculosis. Our data using both radiorespirometry and live-dead staining in vitro demonstrate that NTZ similarly has bactericidal against M. leprae. Further, gavage of M. leprae-infected mice with NTZ at 25mg/kg provided anti-mycobacterial activity equivalent to rifampicin (RIF) at 10 mg/kg. This suggests that NTZ could be considered for leprosy treatment.

Treatment of cryptosporidiosis in immunocompromised individuals: systematic review and meta-analysis.

Adamu I. Abubakar,  N Usman,  C Arumugam … (2007)
Cryptosporidium is a common cause of gastroenteritis and is associated with severe life-threatening illness among immunocompromised individuals. This review aimed to assess the efficacy of interventions for the treatment and prevention of cryptosporidiosis among immunocompromised patients. A search of Medline, Embase and other electronic databases was carried out up to August 2005. Two reviewers independently extracted data and assessed study quality. The relative risk for each intervention was calculated. Seven trials involving 169 participants were included. Nitazoxanide and paramomycin were associated with a relative risk (RR) of reduction in the duration and frequency of diarrhoea of 0.83 [95% confidence interval (CI) 0.36, 1.94] and 0.74 (95% CI 0.42, 1.31), respectively, showing no evidence of effectiveness. Nitazoxanide led to significant evidence of oocyst clearance compared with placebo with a RR of 0.52 (95% CI 0.30, 0.91). The effect was not significant for HIV-seropositive participants (RR 0.71, 95% CI 0.36, 1.37). HIV-seronegative participants on nitazoxanide had a significantly higher relative risk of achieving parasitological clearance of 0.26 (95% CI 0.09, 0.80) based on a single study. No other intervention was associated with either a reduction in diarrhoea, mortality or a significant parasitological response. This review confirms the absence of evidence for effective agents in the management of cryptosporidiosis. The results indicate that nitaxozanide reduces load of parasites and may be useful in immunocompetent individuals. The absence of effective therapy highlights the importance of preventive interventions in this group of patients.

Competing Interests: TP is on the editorial board of PLOS ONE. This does not alter our adherence to PLOS ONE policies on sharing data and materials.

This is an open access article, free of all copyright, and may be freely reproduced, distributed, transmitted, modified, built upon, or otherwise used by anyone for any lawful purpose. The work is made available under the Creative Commons CC0 public domain dedication.