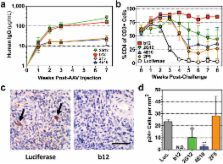 Despite tremendous efforts, development of an effective vaccine against HIV has proved an elusive goal. Recently, however, numerous antibodies have been identified that are capable of neutralizing the vast majority of circulating HIV strains 1– 5 . These antibodies all exhibit an unusually high level of somatic mutation 6 , presumably due to extensive affinity maturation over the course of continuous exposure to an evolving antigen 7 . While substantial effort has focused on the design of immunogens capable of eliciting antibodies de novo that would target similar epitopes 8– 10 , it remains uncertain whether a conventional vaccine will be able to elicit analogs of the existing broadly neutralizing antibodies. As an alternative to immunization, vector-mediated gene transfer could be used to engineer secretion of the existing broadly neutralizing antibodies into the circulation. Here we describe a practical implementation of this approach, vectored immunoprophylaxis (VIP), which in mice induces lifelong expression of these monoclonal antibodies at high concentrations from a single intramuscular injection. This is achieved using a specialized adeno-associated virus (AAV) vector optimized for the production of full-length antibody from muscle tissue. We show that humanized mice receiving VIP appear to be fully protected from HIV infection even when challenged intravenously with very high doses of replication-competent virus. Our results suggest that successful translation of this approach to humans may produce effective prophylaxis against HIV.

Mauricio R Alvira,  Julie Johnston,  Guang Gao … (2002)
Tissues from rhesus monkeys were screened by PCR for the presence of sequences homologous to known adeno-associated virus (AAV) serotypes 1-6. DNA spanning entire rep-cap ORFs from two novel AAVs, called AAV7 and AAV8, were isolated. Sequence comparisons among these and previously described AAVs revealed the greatest divergence in capsid proteins. AAV7 and AAV8 were not neutralized by heterologous antisera raised to the other serotypes. Neutralizing antibodies to AAV7 and AAV8 were rare in human serum and, when present, were low in activity. Vectors formed with capsids from AAV7 and AAV8 were generated by using rep and inverted terminal repeats (ITRs) from AAV2 and were compared with similarly constructed vectors made from capsids of AAV1, AAV2, and AAV5. Murine models of skeletal muscle and liver-directed gene transfer were used to evaluate relative vector performance. AAV7 vectors demonstrated efficiencies of transgene expression in skeletal muscle equivalent to that observed with AAV1, the most efficient known serotype for this application. In liver, transgene expression was 10- to 100-fold higher with AAV8 than observed with other serotypes. This improved efficiency correlated with increased persistence of vector DNA and higher number of transduced hepatocytes. The efficiency of AAV8 vector for liver-directed gene transfer of factor IX was not impacted by preimmunization with the other AAV serotypes. Vectors based on these novel, nonhuman primate AAVs should be considered for human gene therapy because of low reactivity to antibodies directed to human AAVs and because gene transfer efficiency in muscle was similar to that obtained with the best known serotype, whereas, in liver, gene transfer was substantially higher than previously described.

M. Guffey,  Bette Korber,  Gayathri Athreya … (2008)
Accurate identification of the transmitted virus and sequences evolving from it could be instrumental in elucidating the transmission of human immunodeficiency virus type 1 (HIV-1) and in developing vaccines, drugs, or microbicides to prevent infection. Here we describe an experimental approach to analyze HIV-1 env genes as intact genetic units amplified from plasma virion RNA by single-genome amplification (SGA), followed by direct sequencing of uncloned DNA amplicons. We show that this strategy precludes in vitro artifacts caused by Taq-induced nucleotide substitutions and template switching, provides an accurate representation of the env quasispecies in vivo, and has an overall error rate (including nucleotide misincorporation, insertion, and deletion) of less than 8 x 10(-5). Applying this method to the analysis of virus in plasma from 12 Zambian subjects from whom samples were obtained within 3 months of seroconversion, we show that transmitted or early founder viruses can be identified and that molecular pathways and rates of early env diversification can be defined. Specifically, we show that 8 of the 12 subjects were each infected by a single virus, while 4 others acquired more than one virus; that the rate of virus evolution in one subject during an 80-day period spanning seroconversion was 1.7 x 10(-5) substitutions per site per day; and that evidence of strong immunologic selection can be seen in Env and overlapping Rev sequences based on nonrandom accumulation of nonsynonymous mutations. We also compared the results of the SGA approach with those of more-conventional bulk PCR amplification methods performed on the same patient samples and found that the latter is associated with excessive rates of Taq-induced recombination, nucleotide misincorporation, template resampling, and cloning bias. These findings indicate that HIV-1 env genes, other viral genes, and even full-length viral genomes responsible for productive clinical infection can be identified by SGA analysis of plasma virus sampled at intervals typical in large-scale vaccine trials and that pathways of viral diversification and immune escape can be determined accurately.

H Katinger,  R. Clair,  Xin Liao … (2005)
The design of a human immunodeficiency virus-1 (HIV-1) immunogen that can induce broadly reactive neutralizing antibodies is a major goal of HIV-1 vaccine development. Although rare human monoclonal antibodies (mAbs) exist that broadly neutralize HIV-1, HIV-1 envelope immunogens do not induce these antibody specificities. Here we demonstrate that the two most broadly reactive HIV-1 envelope gp41 human mAbs, 2F5 and 4E10, are polyspecific autoantibodies reactive with the phospholipid cardiolipin. Thus, current HIV-1 vaccines may not induce these types of antibodies because of autoantigen mimicry of the conserved membrane-proximal epitopes of the virus. These results may have important implications for generating effective neutralizing antibody responses by using HIV-1 vaccines.