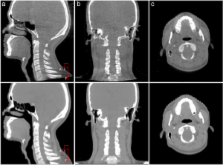 Fifteen NPC patients scheduled to undergo VMAT were prospectively enrolled in the study. For each patient, three CBCT scans were obtained; one after daily conventional positioning, one after online correction with 2 mm tolerance and one after 1 week of VMAT delivery. The scans were registered to the planning CT to determine the inter- and intra-fraction errors. Patient positioning errors were analyzed for time trends over the course of radiotherapy. PTV margins were calculated from the systematic (Σ) and random (σ) errors.

CBCT is an effective modality to evaluate and improve the accuracy of VMAT in NPC patients. Inter- and intra-fraction three-dimensional displacements increased as a function of time during the course of radiotherapy. In our institution, we recommend a PTV margin of 5 mm for NPC patients undergoing VMAT without CBCT and 3 mm for those treated with rigorous daily CBCT scans.

Karl-Otto Bischoff (2007)
In this work a novel plan optimization platform is presented where treatment is delivered efficiently and accurately in a single dynamically modulated arc. Improvements in patient care achieved through image-guided positioning and plan adaptation have resulted in an increase in overall treatment times. Intensity-modulated radiation therapy (IMRT) has also increased treatment time by requiring a larger number of beam directions, increased monitor units (MU), and, in the case of tomotherapy, a slice-by-slice delivery. In order to maintain a similar level of patient throughput it will be necessary to increase the efficiency of treatment delivery. The solution proposed here is a novel aperture-based algorithm for treatment plan optimization where dose is delivered during a single gantry arc of up to 360 deg. The technique is similar to tomotherapy in that a full 360 deg of beam directions are available for optimization but is fundamentally different in that the entire dose volume is delivered in a single source rotation. The new technique is referred to as volumetric modulated arc therapy (VMAT). Multileaf collimator (MLC) leaf motion and number of MU per degree of gantry rotation is restricted during the optimization so that gantry rotation speed, leaf translation speed, and dose rate maxima do not excessively limit the delivery efficiency. During planning, investigators model continuous gantry motion by a coarse sampling of static gantry positions and fluence maps or MLC aperture shapes. The technique presented here is unique in that gantry and MLC position sampling is progressively increased throughout the optimization. Using the full gantry range will theoretically provide increased flexibility in generating highly conformal treatment plans. In practice, the additional flexibility is somewhat negated by the additional constraints placed on the amount of MLC leaf motion between gantry samples. A series of studies are performed that characterize the relationship between gantry and MLC sampling, dose modeling accuracy, and optimization time. Results show that gantry angle and MLC sample spacing as low as 1 deg and 0.5 cm, respectively, is desirable for accurate dose modeling. It is also shown that reducing the sample spacing dramatically reduces the ability of the optimization to arrive at a solution. The competing benefits of having small and large sample spacing are mutually realized using the progressive sampling technique described here. Preliminary results show that plans generated with VMAT optimization exhibit dose distributions equivalent or superior to static gantry IMRT. Timing studies have shown that the VMAT technique is well suited for on-line verification and adaptation with delivery times that are reduced to approximately 1.5-3 min for a 200 cGy fraction.

Errors and margins in radiotherapy.

Marcel van Herk (2003)
Clinical radiotherapy procedures aim at high accuracy. However, there are many error sources that act during treatment preparation and execution that limit the accuracy. As a consequence, a safety margin is required to ensure that the planned dose is actually delivered to the target for (almost) all patients. Before treatment planning, a planning computed tomography scan is made. In particular, motion of skin with respect to the internal anatomy limits the reproducibility of this step, introducing a systematic setup error. The second important error source is organ motion. The tumor is imaged in an arbitrary position, leading to a systematic organ motion error. The image may also be distorted because of the interference of the scanning process and organ motion. A further systematic error introduced during treatment planning is caused by the delineation process. During treatment, the most important errors are setup error and organ motion leading to day-to-day variations. There are many ways to define the margins required for these errors. In this article, an overview is given of errors in radiotherapy and margin recipes, based on physical and biological considerations. Respiration motion is treated separately.

Intensity-modulated radiotherapy in the treatment of nasopharyngeal carcinoma: an update of the UCSF experience.

Ping Xia,  C Akazawa,  Pam Akazawa … (2002)
To update our experience with intensity-modulated radiotherapy (IMRT) in the treatment of nasopharyngeal carcinoma (NPC). Between April 1995 and October 2000, 67 patients underwent IMRT for NPC at the University of California-San Francisco (UCSF). There were 20 females and 47 males, with a mean age of 49 (range 17-82). The disease was Stage I in 8 (12%), Stage II in 12 (18%), Stage III in 22 (33%), and Stage IV in 25 (37%). IMRT was delivered using three different techniques: 1) manually cut partial transmission blocks, 2) computer-controlled auto-sequencing segmental multileaf collimator (SMLC), and 3) sequential tomotherapy using a dynamic multivane intensity modulating collimator (MIMiC). Fifty patients received concomitant cisplatinum and adjuvant cisplatinum and 5-FU chemotherapy according to the Intergroup 0099 trial. Twenty-six patients had fractionated high-dose-rate intracavitary brachytherapy boost and 1 patient had gamma knife radiosurgery boost after external beam radiotherapy. The prescribed dose was 65-70 Gy to the gross tumor volume (GTV) and positive neck nodes, 60 Gy to the clinical target volume (CTV), 50-60 Gy to the clinically negative neck, and 5-7 Gy in 2 fractions for the intracavitary brachytherapy boost. Acute and late normal tissue effects were graded according to the Radiation Therapy Oncology Group (RTOG) radiation morbidity scoring criteria. The local progression-free, local-regional progression-free, distant metastasis-free rates, and the overall survival were calculated using the Kaplan-Meier method. With a median follow-up of 31 months (range 7 to 72 months), there has been one local recurrence at the primary site. One patient failed in the neck. Seventeen patients developed distant metastases; 5 of these patients have died. The 4-year estimates of local progression-free, local-regional progression-free, and distant metastases-free rates were 97%, 98%, and 66% respectively. The 4-year estimate of overall survival was 88%. The worst acute toxicity documented was as follows: Grade 1 or 2 in 51 patients, Grade 3 in 15 patients, and Grade 4 in 1 patient. The worst late toxicity was Grade 1 in 20 patients, Grade 2 in 15 patients, Grade 3 in 7 patients, and Grade 4 in 1 patient. At 3 months after IMRT, 64% of the patients had Grade 2, 28% had Grade 1, and 8% had Grade 0 xerostomia. Xerostomia decreased with time. At 24 months, only one of the 41 evaluable patients had Grade 2, 32% had Grade 1, and 66% had Grade 0 or no xerostomia. Analysis of the dose-volume histograms (DVHs) showed that the average maximum, mean, and minimum dose delivered were 79.3 Gy, 74.5 Gy, and 49.4 Gy to the GTV, and 78.9 Gy, 68.7 Gy, and 36.8 Gy to the CTV. An average of only 3% of the GTV and 3% of the CTV received less than 95% of the prescribed dose. Excellent local-regional control for NPC was achieved with IMRT. IMRT provided excellent tumor target coverage and allowed the delivery of a high dose to the target with significant sparing of the salivary glands and other nearby critical normal tissues.