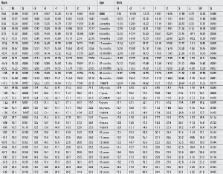 This study aimed to integrate the existing updated reference standards for the growth of Turkish infants and children and to compare these values with World Health Organization (WHO) reference data, data from some European countries, and also with previous local data. Weight, height, and head circumference measurements were obtained on 2,391 boys and 2,102 girls who were regular attenders of a well child clinic and on 1,100 boys and 1,020 girls attending schools in relatively well-off districts in İstanbul. Mean number of measurements per child was 8.2±3.6 in the age group 0-5 years and 5.5±3.3 in the age group 6-18 years. All children were from well-to-do families and all were healthy. All measurements with the exception of measurements at birth, which were based on reported values, were done by trained personnel.

The LMS method was used in the analyses and in the construction of the percentile charts. There is an increase in weight for age and body mass index values for age starting in prepubertal ages, indicating an increasing trend for obesity.

Compared to WHO reference data, weight and height values in Turkish children were slightly higher in infants and in children younger than 5 years, while they showed similarity to those reported for children from Norway and Belgium. Head circumference values, which were slightly higher than the WHO references in the first 5 years, were comparable to the data on Belgian and Norwegian children in the first 9 years of life. At older ages, Turkish children showed higher values for head circumference.

The relatively larger head circumference values were interpreted to reflect a genetic characteristic.

Physical status: the use and interpretation of anthropometry

2000 CDC Growth Charts for the United States: methods and development.

Robert J. Kuczmarski, Cynthia Ogden, Shumei S. Guo … (2002)
This report provides detailed information on how the 2000 Centers for Disease Control and Prevention (CDC) growth charts for the United States were developed, expanding upon the report that accompanied the initial release of the charts in 2000. The growth charts were developed with data from five national health examination surveys and limited supplemental data. Smoothed percentile curves were developed in two stages. In the first stage, selected empirical percentiles were smoothed with a variety of parametric and nonparametric procedures. In the second stage, parameters were created to obtain the final curves, additional percentiles and z-scores. The revised charts were evaluated using statistical and graphical measures. The 1977 National Center for Health Statistics (NCHS) growth charts were revised for infants (birth to 36 months) and older children (2 to 20 years). New body mass index-for-age (BMI-for-age) charts were created. Use of national data improved the transition from the infant charts to those for older children. The evaluation of the charts found no large or systematic differences between the smoothed percentiles and the empirical data. The 2000 CDC growth charts were developed with improved data and statistical procedures. Health care providers now have an instrument for growth screening that better represents the racial-ethnic diversity and combination of breast- and formula-feeding in the United States. It is recommended that these charts replace the 1977 NCHS charts when assessing the size and growth patterns of infants, children, and adolescents.

Stewart T. Cole, Peter G. Green, Mark P. Green (1992)
Refence centile curves show the distribution of a measurement as it changes according to some covariate, often age. The LMS method summarizes the changing distribution by three curves representing the median, coefficient of variation and skewness, the latter expressed as a Box-Cox power. Using penalized likelihood the three curves can be fitted as cubic splines by non-linear regression, and the extent of smoothing required can be expressed in terms of smoothing parameters or equivalent degrees of freedom. The method is illustrated with data on triceps skinfold in Gambian girls and women, and body weight in U.S.A. girls.