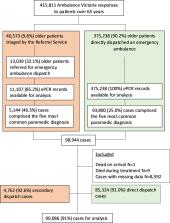 Most calls to ambulance result in emergency ambulance dispatch (direct dispatch) following primary telephone triage. Ambulance Victoria uses clinician-led secondary telephone triage for patients identified as low-acuity during primary triage to refer them to alternative care pathways; however, some are returned for ambulance dispatch (secondary dispatch). Older adult patients are frequent users of ambulance services; however, little is known about the appropriateness of subsequent secondary dispatches.

A retrospective cohort study of ambulance patient data between September 2009 and June 2012 was conducted.

Secondary triage could identify patients who would ultimately be transported to an emergency department. However, the lower paramedic treatment rates suggest many secondary dispatch patients may have been suitable for referral to alternative low-acuity transport or referral options.

Validation of a combined comorbidity index

Judy Lowthian,  Johannes Stoelwinder,  Christopher Curtis … (2011)
To measure the growth in emergency ambulance use across metropolitan Melbourne since 1995, to measure the impact of population growth and ageing on these services, and to forecast demand for these services in 2015. A population-based retrospective analysis of Ambulance Victoria's metropolitan emergency ambulance transportation data for the period from financial year 1994-95 to 2007-08, and modelling of demand in the financial year 2014-15. Numbers and rates of emergency ambulance transportations. The crude annual rate of emergency transportations across all age groups increased from 32 per 1000 people in 1994-95 to 58 per 1000 people in 2007-08. The rate of transportation for all ages increased by 75% (95% CI, 62%-89%) over the 14-year study period, representing an average annual growth rate of 4.8% (95% CI, 4.3%-5.3%) beyond that explained by demographic changes. Patients aged ≥ 85 years were eight times (incident rate ratio, 7.9 [95% CI, 7.6-8.3]) as likely to be transported than those aged 45-69 years over this period. Forecast models suggest that the number of transportations will increase by 46%-69% between 2007-08 and 2014-15, disproportionately driven by increasing usage by patients aged ≥ 85 years. These findings confirm a dramatic rise in emergency transportations over the study period, beyond that expected from demographic changes. Rates increased across all age groups, but more so in older patients. In the future, such acceleration is likely to have major effects on ambulance services and acute hospital capacity. This calls for further investigation of underlying causes and alternative models of care.

Emergency (999) calls to the ambulance service that do not result in the patient being transported to hospital: an epidemiological study.

Kala P. Marks,  Jereme Spiers,  M Vijver … (2002)
To describe the demographic and clinical characteristics of patients who are not transported to hospital after an emergency (999) call to the East Midlands Ambulance Service, the reason for non-transportation, and the priority assigned when the ambulance is dispatched. The first 500 consecutive non-transported patients from 1 March 2000 were identified from the ambulance service command and control data. Epidemiological and clinical data were then obtained from the patient report form completed by the attending ambulance crew and compared with the initial priority dispatch (AMPDS) code that determined the urgency of the ambulance response. Data were obtained for 498 patients. Twenty six per cent of these calls were assigned an AMPDS delta code (the most urgent category) at the time the call was received. Falls accounted for 34% of all non-transported calls. This group of patients were predominantly elderly people (over 70 years old) and the majority (89%) were identified as less urgent (coded AMPDS alpha or bravo) at telephone triage. The mean time that an ambulance was committed to each non-transported call was 34 minutes. This study shows that falls in elderly people account for a significant proportion of non-transported 999 calls and are often assigned a low priority when the call is first received. There could be major gains if some of these patients could be triaged to an alternative response, both in terms of increasing the ability of the ambulance service to respond faster to clinically more urgent calls and improving the cost effectiveness of the health service. The AMPDS priority dispatch system has been shown to be sensitive but this study suggests that its specificity may be poor, resulting in rapid responses to relatively minor problems. More research is required to determine whether AMPDS prioritisation can reliably and safely identify 999 calls where an alternative to an emergency ambulance would be a more appropriate response.