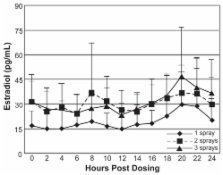 Vasomotor symptoms (VMS) associated with menopause can cause significant discomfort and decrease the quality of life for women in the peri-menopausal and post-menopausal stages of life. Hormone therapy (HT) is the mainstay of treatment for menopausal symptoms and is currently the only therapy proven effective for VMS. Numerous HT options are available to treat VMS, including estrogen-only and estrogen-progestogen combination products to meet the needs of both hysterectomized and nonhysterectomized women. In addition to selecting an appropriate estrogen or estrogen-progestogen combination, consideration should be given to the route of administration to best suit the needs of the patient. Delivery systems for hormone therapy include oral tablets, transdermal patches, transdermal topical (nonpatch) products, and intravaginal preparations. Oral is currently the most commonly utilized route of administration in the United States. However, evidence suggests that oral delivery may lead to some undesirable physiologic effects caused by significant gut and hepatic metabolism. Transdermal drug delivery may mitigate some of these effects by avoiding gut and hepatic first-pass metabolism. Advantages of transdermal delivery include the ability to administer unmetabolized estradiol directly to the blood stream, administration of lower doses compared to oral products, and minimal stimulation of hepatic protein production. Several estradiol transdermal delivery technologies are available, including various types of patches, topical gels, and a transdermal spray.

Kevin Bush,  D Grady,  S Hulley … (1998)
Observational studies have found lower rates of coronary heart disease (CHD) in postmenopausal women who take estrogen than in women who do not, but this potential benefit has not been confirmed in clinical trials. To determine if estrogen plus progestin therapy alters the risk for CHD events in postmenopausal women with established coronary disease. Randomized, blinded, placebo-controlled secondary prevention trial. Outpatient and community settings at 20 US clinical centers. A total of 2763 women with coronary disease, younger than 80 years, and postmenopausal with an intact uterus. Mean age was 66.7 years. Either 0.625 mg of conjugated equine estrogens plus 2.5 mg of medroxyprogesterone acetate in 1 tablet daily (n = 1380) or a placebo of identical appearance (n = 1383). Follow-up averaged 4.1 years; 82% of those assigned to hormone treatment were taking it at the end of 1 year, and 75% at the end of 3 years. The primary outcome was the occurrence of nonfatal myocardial infarction (MI) or CHD death. Secondary cardiovascular outcomes included coronary revascularization, unstable angina, congestive heart failure, resuscitated cardiac arrest, stroke or transient ischemic attack, and peripheral arterial disease. All-cause mortality was also considered. Overall, there were no significant differences between groups in the primary outcome or in any of the secondary cardiovascular outcomes: 172 women in the hormone group and 176 women in the placebo group had MI or CHD death (relative hazard [RH], 0.99; 95% confidence interval [CI], 0.80-1.22). The lack of an overall effect occurred despite a net 11% lower low-density lipoprotein cholesterol level and 10% higher high-density lipoprotein cholesterol level in the hormone group compared with the placebo group (each P<.001). Within the overall null effect, there was a statistically significant time trend, with more CHD events in the hormone group than in the placebo group in year 1 and fewer in years 4 and 5. More women in the hormone group than in the placebo group experienced venous thromboembolic events (34 vs 12; RH, 2.89; 95% CI, 1.50-5.58) and gallbladder disease (84 vs 62; RH, 1.38; 95% CI, 1.00-1.92). There were no significant differences in several other end points for which power was limited, including fracture, cancer, and total mortality (131 vs 123 deaths; RH, 1.08; 95% CI, 0.84-1.38). During an average follow-up of 4.1 years, treatment with oral conjugated equine estrogen plus medroxyprogesterone acetate did not reduce the overall rate of CHD events in postmenopausal women with established coronary disease. The treatment did increase the rate of thromboembolic events and gallbladder disease. Based on the finding of no overall cardiovascular benefit and a pattern of early increase in risk of CHD events, we do not recommend starting this treatment for the purpose of secondary prevention of CHD. However, given the favorable pattern of CHD events after several years of therapy, it could be appropriate for women already receiving this treatment to continue.

Hormone therapy and venous thromboembolism among postmenopausal women: impact of the route of estrogen administration and progestogens: the ESTHER study.

Marianne Canonico,  Emmanuel Oger,  Geneviève Plu-Bureau … (2007)
Oral estrogen therapy increases the risk of venous thromboembolism (VTE) in postmenopausal women. Transdermal estrogen may be safer. However, currently available data have limited the ability to investigate the wide variety of types of progestogen. We performed a multicenter case-control study of VTE among postmenopausal women 45 to 70 years of age between 1999 and 2005 in France. We recruited 271 consecutive cases with a first documented episode of idiopathic VTE (208 hospital cases, 63 outpatient cases) and 610 controls (426 hospital controls, 184 community controls) matched for center, age, and admission date. After adjustment for potential confounding factors, odds ratios (ORs) for VTE in current users of oral and transdermal estrogen compared with nonusers were 4.2 (95% CI, 1.5 to 11.6) and 0.9 (95% CI, 0.4 to 2.1), respectively. There was no significant association of VTE with micronized progesterone and pregnane derivatives (OR, 0.7; 95% CI, 0.3 to 1.9 and OR, 0.9; 95% CI, 0.4 to 2.3, respectively). In contrast, norpregnane derivatives were associated with a 4-fold-increased VTE risk (OR, 3.9; 95% CI, 1.5 to 10.0). Oral but not transdermal estrogen is associated with an increased VTE risk. In addition, our data suggest that norpregnane derivatives may be thrombogenic, whereas micronized progesterone and pregnane derivatives appear safe with respect to thrombotic risk. If confirmed, these findings could benefit women in the management of their menopausal symptoms with respect to the VTE risk associated with oral estrogen and use of progestogens.