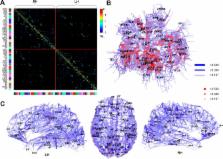 Structurally segregated and functionally specialized regions of the human cerebral cortex are interconnected by a dense network of cortico-cortical axonal pathways. By using diffusion spectrum imaging, we noninvasively mapped these pathways within and across cortical hemispheres in individual human participants. An analysis of the resulting large-scale structural brain networks reveals a structural core within posterior medial and parietal cerebral cortex, as well as several distinct temporal and frontal modules. Brain regions within the structural core share high degree, strength, and betweenness centrality, and they constitute connector hubs that link all major structural modules. The structural core contains brain regions that form the posterior components of the human default network. Looking both within and outside of core regions, we observed a substantial correspondence between structural connectivity and resting-state functional connectivity measured in the same participants. The spatial and topological centrality of the core within cortex suggests an important role in functional integration.

In the human brain, neural activation patterns are shaped by the underlying structural connections that form a dense network of fiber pathways linking all regions of the cerebral cortex. Using diffusion imaging techniques, which allow the noninvasive mapping of fiber pathways, we constructed connection maps covering the entire cortical surface. Computational analyses of the resulting complex brain network reveal regions of cortex that are highly connected and highly central, forming a structural core of the human brain. Key components of the core are portions of posterior medial cortex that are known to be highly activated at rest, when the brain is not engaged in a cognitively demanding task. Because we were interested in how brain structure relates to brain function, we also recorded brain activation patterns from the same participant group. We found that structural connection patterns and functional interactions between regions of cortex were significantly correlated. Based on our findings, we suggest that the structural core of the brain may have a central role in integrating information across functionally segregated brain regions.

Mapping of major structural connections of the human cortex reveals a core of brain regions that are highly interconnected and highly central with respect to the rest of the brain.

Modularity and community structure in networks

M. Newman (2006)
Many networks of interest in the sciences, including a variety of social and biological networks, are found to divide naturally into communities or modules. The problem of detecting and characterizing this community structure has attracted considerable recent attention. One of the most sensitive detection methods is optimization of the quality function known as "modularity" over the possible divisions of a network, but direct application of this method using, for instance, simulated annealing is computationally costly. Here we show that the modularity can be reformulated in terms of the eigenvectors of a new characteristic matrix for the network, which we call the modularity matrix, and that this reformulation leads to a spectral algorithm for community detection that returns results of better quality than competing methods in noticeably shorter running times. We demonstrate the algorithm with applications to several network data sets.

Small-world anatomical networks in the human brain revealed by cortical thickness from MRI.

Natalie C. Evans,  Jianbo Chen,  Yong-Kang He (2007)
An important issue in neuroscience is the characterization for the underlying architectures of complex brain networks. However, little is known about the network of anatomical connections in the human brain. Here, we investigated large-scale anatomical connection patterns of the human cerebral cortex using cortical thickness measurements from magnetic resonance images. Two areas were considered anatomically connected if they showed statistically significant correlations in cortical thickness and we constructed the network of such connections using 124 brains from the International Consortium for Brain Mapping database. Significant short- and long-range connections were found in both intra- and interhemispheric regions, many of which were consistent with known neuroanatomical pathways measured by human diffusion imaging. More importantly, we showed that the human brain anatomical network had robust small-world properties with cohesive neighborhoods and short mean distances between regions that were insensitive to the selection of correlation thresholds. Additionally, we also found that this network and the probability of finding a connection between 2 regions for a given anatomical distance had both exponentially truncated power-law distributions. Our results demonstrated the basic organizational principles for the anatomical network in the human brain compatible with previous functional networks studies, which provides important implications of how functional brain states originate from their structural underpinnings. To our knowledge, this study provides the first report of small-world properties and degree distribution of anatomical networks in the human brain using cortical thickness measurements.

Andreas Meyer-Lindenberg,  Thomas Duke,  Edward Bullmore … (2006)
Brain function depends on adaptive self-organization of large-scale neural assemblies, but little is known about quantitative network parameters governing these processes in humans. Here, we describe the topology and synchronizability of frequency-specific brain functional networks using wavelet decomposition of magnetoencephalographic time series, followed by construction and analysis of undirected graphs. Magnetoencephalographic data were acquired from 22 subjects, half of whom performed a finger-tapping task, whereas the other half were studied at rest. We found that brain functional networks were characterized by small-world properties at all six wavelet scales considered, corresponding approximately to classical delta (low and high), , alpha, beta, and gamma frequency bands. Global topological parameters (path length, clustering) were conserved across scales, most consistently in the frequency range 2-37 Hz, implying a scale-invariant or fractal small-world organization. Dynamical analysis showed that networks were located close to the threshold of order/disorder transition in all frequency bands. The highest-frequency gamma network had greater synchronizability, greater clustering of connections, and shorter path length than networks in the scaling regime of (lower) frequencies. Behavioral state did not strongly influence global topology or synchronizability; however, motor task performance was associated with emergence of long-range connections in both beta and gamma networks. Long-range connectivity, e.g., between frontal and parietal cortex, at high frequencies during a motor task may facilitate sensorimotor binding. Human brain functional networks demonstrate a fractal small-world architecture that supports critical dynamics and task-related spatial reconfiguration while preserving global topological parameters.

Related article ( companion): From Structure to Function: Mapping the Connection Matrix of the Human Brain