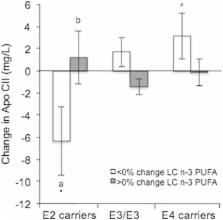 Metabolic markers associated with the Metabolic Syndrome (MetS) may be affected by interactions between the APOE genotype and plasma fatty acids (FA). In this study, we explored FA-gene interactions between the missense APOE polymorphisms and FA status on metabolic markers in MetS. Plasma FA, blood pressure, insulin sensitivity and lipid concentrations were determined at baseline and following a 12-week randomized, controlled, parallel, dietary FA intervention in 442 adults with MetS (LIPGENE study). FA- APOE gene interactions at baseline and following change in plasma FA were assessed using adjusted general linear models. At baseline E4 carriers had higher plasma concentrations of total cholesterol (TC), low-density lipoprotein cholesterol (LDL-C) and apolipoprotein B (apo B) compared with E2 carriers; and higher TC, LDL-C and apo B compared with E3/E3. Whilst elevated plasma n-3 polyunsaturated FA (PUFA) was associated with a beneficially lower concentration of apo CIII in E2 carriers, a high proportion of plasma C16:0 was associated with insulin resistance in E4 carriers. Following FA intervention, a reduction in plasma long-chain n-3 PUFA was associated with a reduction in apo CII concentration in E2 carriers. Our novel data suggest that individuals with MetS may benefit from personalized dietary interventions based on APOE genotype.

Risks for all-cause mortality, cardiovascular disease, and diabetes associated with the metabolic syndrome: a summary of the evidence.

Effects on Coronary Heart Disease of Increasing Polyunsaturated Fat in Place of Saturated Fat: A Systematic Review and Meta-Analysis of Randomized Controlled Trials