Notes on the Recent History of Neuroscience in Africa 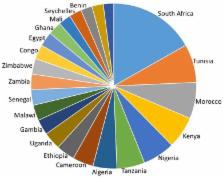 Neuroscience began with neuroanatomy and neurosurgery in Egypt more than 5000 years ago. Knowledge grew over time and specialized neurosurgery centers were established in north Africa in the eleventh century. However, it was not until the twentieth century that neuroscience research became established in sub-Saharan Africa. In most African countries, clinical research focused on understanding the rationale and improving treatment of epilepsy, infections, nutritional neuropathies, stroke and tumors. Significant advances were made. In the twenty-first century, African knowledge expanded to include all branches of neuroscience, contributing to genetic, biochemical and inflammatory determinants of brain disorders. A major focus of basic neuroscience research has been, and is, investigation of plant extracts, drugs and stress in animal models, providing insight and identifying potential novel therapies. A significant event in the history of African neuroscience was the founding of the Society of Neuroscientists of Africa (SONA) in 1993. The International Brain Research Organization (IBRO) supported SONA conferences, as well as workshops and neuroscience training schools in Africa. Thanks to their investment, as well as that of funding agencies, such as the National Institutes of Health (NIH), International Society for Neurochemistry (ISN), World Federation of Neurosurgical Societies (WFNS), World Federation of Neurology (WFN) and the International League Against Epilepsy (ILAE), neuroscience research is well-established in Africa today. However, in order to continue to develop, African neuroscience needs continued international support and African neuroscientists need to engage in policy and decision-making to persuade governments to fund studies that address the unique regional needs in Africa.

African trypanosome infections of the nervous system: parasite entry and effects on sleep and synaptic functions.

Krister Kristensson,  Mikael Nygård,  Giuseppe Bertini … (2010)
The extracellular parasite Trypanosoma brucei causes human African trypanosomiasis (HAT), also known as sleeping sickness. Trypanosomes are transmitted by tsetse flies and HAT occurs in foci in sub-Saharan Africa. The disease, which is invariably lethal if untreated, evolves in a first hemo-lymphatic stage, progressing to a second meningo-encephalitic stage when the parasites cross the blood-brain barrier. At first, trypanosomes are restricted to circumventricular organs and choroid plexus in the brain outside the blood-brain barrier, and to dorsal root ganglia. Later, parasites cross the blood-brain barrier at post-capillary venules, through a multi-step process similar to that of lymphocytes. Accumulation of parasites in the brain is regulated by cytokines and chemokines. Trypanosomes can alter neuronal function and the most prominent manifestation is represented by sleep alterations. These are characterized, in HAT and experimental rodent infections, by disruption of the sleep-wake 24h cycle and internal sleep structure. Trypanosome infections alter also some, but not all, other endogenous biological rhythms. A number of neural pathways and molecules may be involved in such effects. Trypanosomes secrete prostaglandins including the somnogenic PGD2, and they interact with the host's immune system to cause release of pro-inflammatory cytokines. From the sites of early localization of parasites in the brain and meninges, such molecules could affect adjacent brain areas implicated in sleep-wakefulness regulation, including the suprachiasmatic nucleus and its downstream targets, to cause the changes characteristic of the disease. This raises challenging issues on the effects of cytokines on synaptic functions potentially involved in sleep-wakefulness alterations. (c) 2009 Elsevier Ltd. All rights reserved.

Mechanism of action of cathinone: the active ingredient of khat (Catha edulis).