Rodents as intermediate hosts of cestode parasites of mammalian carnivores and birds of prey in Poland, with the first data on the life-cycle of Mesocestoides melesi 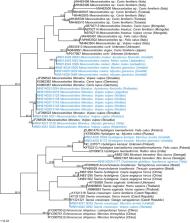 Rodents constitute an important part of the diet of many carnivore species. This predator-prey food chain is exploited by helminth parasites, such as cestodes, whose larval stages develop in rodents and then mature to the adult stage in predators. The main aim of our study was to use molecular techniques for identification of cestode species recovered from both intermediate and definitive hosts, with a particular focus on the genus Mesocestoides.

Altogether 19 Mesocestoides samples were analyzed, including 13 adult tapeworms from definitive hosts and six larval samples from 4 bank voles and 2 yellow-necked mice. Phylogenetic analyses revealed three well-supported trees of similar topology. In each case the Mesocestoides samples formed two separate clades. All isolates from foxes, the lynx isolate and two isolates from rodents grouped with Mesocestoides litteratus. Four isolates from rodents and all three isolates from Eurasian badgers were resolved in a separate clade, most similar to North American M. vogae (syn. M. corti). Examination of fixed, stained adult specimens from Eurasian badgers revealed consistency with the morphology of Mesocestoides melesi. Therefore, this clade is likely to represent M. melesi, a species first described in 1985 from the Eurasian badger Meles meles. Molecular analysis allowed also the identification of Taenia crassiceps, Hydatigera kamiyai and Cladotaenia globifera among larvae derived from rodents.

Molecular and phylogenetic analyses support the recognition of M. melesi as a valid species. Our data represent the first record of the larvae of this species in rodents. This is the first report on the occurrence of H. kamiyai in rodents from Poland. 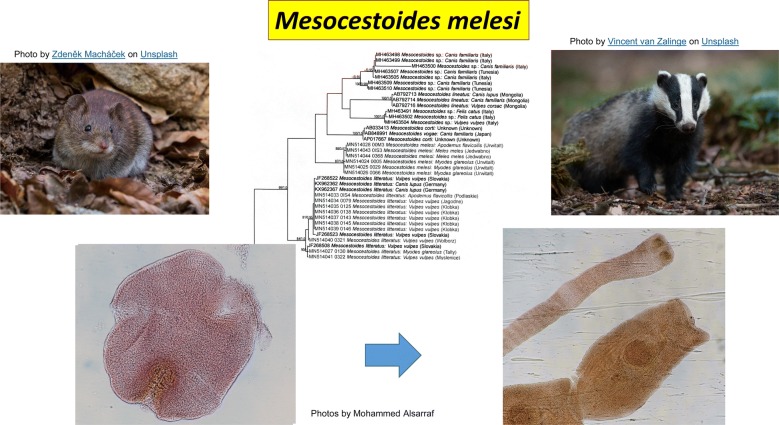 A molecular phylogeny of the human schistosomes.

David McManus,  Carol D. Blair,  Erin J. Aiello Bowles (1995)
Members of the genus Schistosoma are generally grouped on the basis of egg morphology, intermediate host specificity, and geographic origin. We have tested hypotheses based on these groupings by phylogenetic analysis of nuclear ribosomal (ITS2) and mitochondrial (COI) nucleotide sequences. Both mitochondrial and nuclear DNA data strongly support "traditional" hypotheses that (a) members of the Schistosoma haematobium group form a monophyletic clade, (b) members of the S. mansoni group form a monophyletic clade, (c) S. japonicum and S. mekongi form a monophyletic group relative to other schistosomes, and (d) the African schistosomes form a clade to the exclusion of the two Asian species.

Molecular phylogeny of the genus Taenia (Cestoda: Taeniidae): proposals for the resurrection of Hydatigera Lamarck, 1816 and the creation of a new genus Versteria.

Minoru Nakao,  Sergey Konyaev,  T Iwaki … (2013)
The cestode family Taeniidae generally consists of two valid genera, Taenia and Echinococcus. The genus Echinococcus is monophyletic due to a remarkable similarity in morphology, features of development and genetic makeup. By contrast, Taenia is a highly diverse group formerly made up of different genera. Recent molecular phylogenetic analyses strongly suggest the paraphyly of Taenia. To clarify the genetic relationships among the representative members of Taenia, molecular phylogenies were constructed using nuclear and mitochondrial genes. The nuclear phylogenetic trees of 18S ribosomal DNA and concatenated exon regions of protein-coding genes (phosphoenolpyruvate carboxykinase and DNA polymerase delta) demonstrated that both Taenia mustelae and a clade formed by Taenia parva, Taenia krepkogorski and Taenia taeniaeformis are only distantly related to the other members of Taenia. Similar topologies were recovered in mitochondrial genomic analyses using 12 complete protein-coding genes. A sister relationship between T. mustelae and Echinococcus spp. was supported, especially in protein-coding gene trees inferred from both nuclear and mitochondrial data sets. Based on these results, we propose the resurrection of Hydatigera Lamarck, 1816 for T. parva, T. krepkogorski and T. taeniaeformis and the creation of a new genus, Versteria, for T. mustelae. Due to obvious morphological and ecological similarities, Taenia brachyacantha is also included in Versteria gen. nov., although molecular evidence is not available. Taenia taeniaeformis has been historically regarded as a single species but the present data clearly demonstrate that it consists of two cryptic species. Copyright © 2013 Australian Society for Parasitology Inc. Published by Elsevier Ltd. All rights reserved.