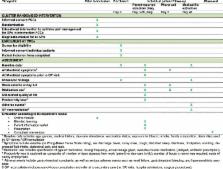 Whilst current guidelines highlight the importance of pain management for children with acute otitis media (AOM), there is evidence to suggest that this is not implemented in everyday practice. We have developed a primary care-based multifaceted educational intervention to optimise pain management in children with AOM, and we trial its clinical and cost effectiveness.

This cluster randomised controlled trial aims to recruit 250 children aged 6 months to 10 years presenting with AOM to general practitioners (GPs) in 30 primary care centres (PCCs) across the Netherlands. GPs in the PCCs allocated to the intervention group receive a blended GP educational programme (online and face-to-face training). The intervention asks GPs to proactively discuss pain management with parents using an information leaflet, and to prescribe paracetamol and ibuprofen according to current guidelines. GPs in both groups complete an online module illustrating various otoscopic images to standardise AOM diagnosis. GPs in the PCCs allocated to the control group do not receive any further training and provide ‘care as usual’.

During the 4-week follow-up, parents complete a symptom diary. The primary outcome is the difference in parent-reported mean earache scores over the first 3 days. Secondary outcomes include both number of days with earache and fever, GP re-consultations for AOM, antibiotic prescriptions, and costs. Analysis will be by intention-to-treat.

The optimal use of analgesics through the multifaceted intervention may provide symptom relief and thereby reduce re-consultations and antibiotic prescriptions in children with AOM.

The friction cost method for measuring indirect costs of disease.

Marc Koopmanschap,  Frans Rutten,  B.Martin van Ineveld … (1995)
A new approach for estimating the indirect costs of disease, which explicitly considers economic circumstances that limit production losses due to disease, is presented (the friction cost method). For the Netherlands the short-term friction costs in 1990 amount to 1.5-2.5% of net national income (NNI), depending on the extent to which short-term absence from work induces production loss and costs. The medium-term macro-economic consequences of absence from work and disability reduce NNI by an additional 0.8%. These estimates are considerably lower than estimates based on the traditional human capital approach, but they better reflect the economic impact of illness.

Mary O'Brien (corresponding) ,  Stephen Rogers,  Gro Jamtvedt … (2007)
Educational outreach visits (EOVs) have been identified as an intervention that may improve the practice of healthcare professionals. This type of face-to-face visit has been referred to as university-based educational detailing, academic detailing, and educational visiting. To assess the effects of EOVs on health professional practice or patient outcomes. For this update, we searched the Cochrane EPOC register to March 2007. In the original review, we searched multiple bibliographic databases including MEDLINE and CINAHL. Randomised trials of EOVs that reported an objective measure of professional performance or healthcare outcomes. An EOV was defined as a personal visit by a trained person to healthcare professionals in their own settings. Two reviewers independently extracted data and assessed study quality. We used bubble plots and box plots to visually inspect the data. We conducted both quantitative and qualitative analyses. We used meta-regression to examine potential sources of heterogeneity determined a priori. We hypothesised eight factors to explain variation across effect estimates. In our primary visual and statistical analyses, we included only studies with dichotomous outcomes, with baseline data and with low or moderate risk of bias, in which the intervention included an EOV and was compared to no intervention. We included 69 studies involving more than 15,000 health professionals. Twenty-eight studies (34 comparisons) contributed to the calculation of the median and interquartile range for the main comparison. The median adjusted risk difference (RD) in compliance with desired practice was 5.6% (interquartile range 3.0% to 9.0%). The adjusted RDs were highly consistent for prescribing (median 4.8%, interquartile range 3.0% to 6.5% for 17 comparisons), but varied for other types of professional performance (median 6.0%, interquartile range 3.6% to 16.0% for 17 comparisons). Meta-regression was limited by the large number of potential explanatory factors (eight) with only 31 comparisons, and did not provide any compelling explanations for the observed variation in adjusted RDs. There were 18 comparisons with continuous outcomes, with a median adjusted relative improvement of 21% (interquartile range 11% to 41%). There were eight trials (12 comparisons) in which the intervention included an EOV and was compared to another type of intervention, usually audit and feedback. Interventions that included EOVs appeared to be slightly superior to audit and feedback. Only six studies evaluated different types of visits in head-to-head comparisons. When individual visits were compared to group visits (three trials), the results were mixed. EOVs alone or when combined with other interventions have effects on prescribing that are relatively consistent and small, but potentially important. Their effects on other types of professional performance vary from small to modest improvements, and it is not possible from this review to explain that variation.