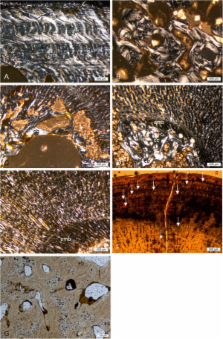 Eosauropterygians consist of two major clades, the Nothosauroidea of the Tethysian Middle Triassic (e.g., Nothosaurus) and the Pistosauroidea. The Pistosauroidea include rare Triassic forms (Pistosauridae) and the Plesiosauria of the Jurassic and Cretaceous. Long bones of Nothosaurus and Pistosaurus from the Muschelkalk (Middle Triassic) of Germany and France and a femur of the Lower Jurassic Plesiosaurus dolichodeirus were studied histologically and microanatomically to understand the evolution of locomotory adaptations, patterns of growth and life history in these two lineages.

We found that the cortex of adult Nothosaurus long bones consists of lamellar zonal bone. Large Upper Muschelkalk humeri of large-bodied Nothosaurus mirabilis and N. giganteus differ from the small Lower Muschelkalk ( Nothosaurus marchicus/ N. winterswijkensis) humeri by a striking microanatomical specialization for aquatic tetrapods: the medullary cavity is much enlarged and the cortex is reduced to a few millimeters in thickness. Unexpectedly, the humeri of Pistosaurus consist of continuously deposited, radially vascularized fibrolamellar bone tissue like in the Plesiosaurus sample. Plesiosaurus shows intense Haversian remodeling, which has never been described in Triassic sauropterygians.

The generally lamellar zonal bone tissue of nothosaur long bones indicates a low growth rate and suggests a low basal metabolic rate. The large triangular cross section of large-bodied Nothosaurus from the Upper Muschelkalk with their large medullary region evolved to withstand high bending loads. Nothosaurus humerus morphology and microanatomy indicates the evolution of paraxial front limb propulsion in the Middle Triassic, well before its convergent evolution in the Plesiosauria in the latest Triassic. Fibrolamellar bone tissue, as found in Pistosaurus and Plesiosaurus, suggests a high growth rate and basal metabolic rate. The presence of fibrolamellar bone tissue in Pistosaurus suggests that these features had already evolved in the Pistosauroidea by the Middle Triassic, well before the plesiosaurs radiated. Together with a relatively large body size, a high basal metabolic rate probably was the key to the invasion of the Pistosauroidea of the pelagic habitat in the Middle Triassic and the success of the Plesiosauria in the Jurassic and Cretaceous.

Franziska Mullauer,  Jan Kessler,  Jan Paul Medema (2009)
Betulinic Acid (BetA) and its derivatives have been extensively studied in the past for their anti-tumor effects, but relatively little is known about its precursor Betulin (BE). We found that BE induces apoptosis utilizing a similar mechanism as BetA and is prevented by cyclosporin A (CsA). BE induces cell death more rapidly as compared to BetA, but to achieve similar amounts of cell death a considerably higher concentration of BE is needed. Interestingly, we observed that cholesterol sensitized cells to BE-induced apoptosis, while there was no effect of cholesterol when combined with BetA. Despite the significantly enhanced cytotoxicity, the mode of cell death was not changed as CsA completely abrogated cell death. These results indicate that BE has potent anti-tumor activity especially in combination with cholesterol.

Longbone histology of the Tendaguru sauropods: implications for growth and biology

Patricia Erickson (2005)
Some of the longest standing questions in dinosaur paleontology pertain to their development. Did dinosaurs grow at slow rates similar to extant reptiles or rapidly similar to living birds and mammals? How did some forms attain gigantic proportions? Conversely, how did birds (avian dinosaurs) become miniaturized? New data on dinosaur longevity garnered from bone microstructure (i.e. osteohistology) are making it possible to assess basic life-history parameters of the dinosaurs such as growth rates and timing of developmental events. Analyses of these data in an evolutionary context are enabling the identification of developmental patterns that lead to size changes within the Dinosauria. Furthermore, this rich new database is providing inroads for studying individual and population biology. All in all, paleohistological research is proving to be the most promising avenue towards gaining a comprehensive understanding of dinosaur biology.