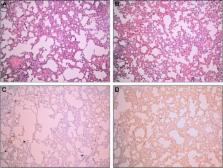 Characterized by its acute onset, critical condition, poor prognosis, and high mortality rate, severe acute pancreatitis (SAP) can cause multiple organ failure at its early stage, particularly acute lung injury (ALI). The pathogenesis of ALI is diffuse alveolar damage, including an increase in pulmonary microvascular permeability, a decrease in compliance, and invasion of many inflammatory cells. Corticosteroids are the main treatment method for ALI; however, the associated high toxicity and side effects induce pain in patients. Recent studies show that the effective components in many traditional Chinese medicines can effectively inhibit inflammation with few side effects, which can decrease the complications caused by steroid consumption. Based on these observations, the main objective of the current study is to investigate the effect of alpinetin, which is a flavonoid extracted from Alpinia katsumadai Hayata, on treating lung injury induced by SAP and to explore the mechanism underlying the alpinetin-mediated decrease in the extent of ALI. In this study, we have shown through in vitro experiments that a therapeutic dose of alpinetin can promote human pulmonary microvascular endothelial cell proliferation. We have also shown via in vitro and in vivo experiments that alpinetin upregulates aquaporin-1 and, thereby, inhibits tumor necrosis factor-α expression as well as reduces the degree of lung injury. Overall, our study shows that alpinetin alleviates SAP-induced ALI. The likely molecular mechanism includes upregulated aquaporin expression, which inhibits tumor necrosis factor-α and, thus, alleviates SAP-induced ALI.

F Kuhajda,  M Denker,  Peter Agre … (1988)
A novel Mr 28,000 integral membrane protein ("28kDa") was identified in human erythrocytes and found entirely associated with the Triton X-100 insoluble membrane skeletons. Antibodies to 28kDa reacted strongly on immunoblots with 28kDa and a diffuse region of Mr 35,000-60,000 ("HMW-28kDa"). Selective proteolytic digestions of membranes demonstrated that HMW-28kDa has an extracellular domain, and both 28kDa and HMW-28kDa have intracellular domains. 28kDa and HMW-28kDa were purified to homogeneity. Quantitative immunoblots indicate that each erythrocyte contains 120,000-160,000 copies of 28kDa. Two-dimensional iodopeptide maps of 28kDa and HMW-28kDa were nearly identical; peptide-N-glycosidase digestion of purified HMW-28kDa demonstrated that it is the N-glycosylated form of 28kDa. When concentrated, 28kDa formed a series of larger oligomers which were stable in sodium dodecyl sulfate. Of several nonerythroid tissues studied with anti-28kDa immunoblots, only kidney displayed immunoreactive 28kDa. Purified rat kidney 28kDa was nearly identical to rat erythrocyte 28kDa when compared by two-dimensional iodopeptide mapping. Immunohistochemical staining of human kidney with anti-28kDa demonstrated prominent staining over the apical brush borders of proximal convoluted tubules. A novel integral membrane protein has been purified from erythrocyte and kidney membranes. This new protein may play a role in linkage of the membrane skeleton to the lipid bilayer.

M. Krane,  Kevin Harrod,  Tyler J. Towne … (1999)
Intratracheal infection of mice with adenovirus is associated with subsequent pulmonary inflammation and edema. Water movement through the air space-capillary barrier in the distal lung is facilitated by aquaporins (AQPs). To investigate the possibility that distal lung AQPs undergo altered regulation under conditions of aberrant fluid handling in the lung, we analyzed messenger RNA (mRNA) and protein expression of AQPs 1 and 5 in the lungs of mice 7 and 14 d after infection with adenovirus. Here, we demonstrate that AQP1 and AQP5 show decreased expression following adenoviral infection. Northern blot analysis showed significantly decreased mRNA levels of AQP1, which is expressed in the capillary endothelium, and AQP5, which is expressed in alveolar epithelium, in the lungs of mice both 7 and 14 d after infection. Immunoblotting studies demonstrated significantly reduced levels of AQP1 and AQP5 protein after infection as well. In addition, mRNA expression of the alpha subunit of the epithelial sodium channel was reduced in the lungs of mice 7 and 14 d after adenoviral infection. In contrast, mRNA expression of the alpha1 subunit of the Na,K-adenosine triphosphatase in the lung was unaltered. Immunohistochemical analysis demonstrated that the decreases in AQP1 and AQP5 expression were not localized to regions of overt inflammation but were found throughout the lung. Thus, this study provides the first report of AQP gene regulation in an in vivo model of pulmonary inflammation and edema. Decreased AQP1 and AQP5 levels during adenoviral infection suggest a role for AQP1 and AQP5 in the abnormal fluid fluxes detected during pulmonary inflammation.

E Kemppainen,  Ville Pettilä,  R Haapiainen … (2002)
To compare three different multiple organ dysfunction scores in predicting hospital mortality rates and to discover which one best assesses organ dysfunction/failure in patients with severe acute pancreatitis in a general intensive care unit. Retrospective, observational study. Surgical department and a ten-bed general intensive care unit in a tertiary care hospital. Among the 178 consecutive patients admitted to the surgical department with severe acute pancreatitis from 1994 to 1998, 113 patients treated in the general intensive care unit underwent study. None. Clinical and laboratory data were collected during a period of 35 days. Acute Physiology and Chronic Health Evaluation (APACHE) II, Multiple Organ Dysfunction (MOD) score, Sequential Organ Failure Assessment (SOFA) score, and Logistic Organ Dysfunction (LOD) score were calculated and compared regarding hospital mortality rate. In addition, daily maximum score and a total maximum score (sum of the highest values for each organ dysfunction) were calculated for all three scores. The area under the receiver operating characteristic curve was used as a measure of accuracy of the scores. The highest accuracy was revealed with daily maximum scores with the area under the receiver operating characteristic curve 0.847 for SOFA, 0.844 for MOD, and 0.836 for LOD. According to the maximum SOFA score, the highest mortality rate was associated with liver (83%, p <.001) and renal (63%, p <.001) failures. The mortality ratio with two organ failures ranged from 50% to 91%. The highest mortality rate (91%) was for a combination of hepatic and renal failure. In multiple logistic regression analysis, only hepatic, renal, and cardiovascular failure and previous cardiovascular medication were independent risk factors for hospital mortality. In patients with severe acute pancreatitis, organ dysfunction scores (MOD, SOFA, LOD) show good accuracy, comparable with APACHE II in predicting hospital mortality. The maximum daily organ dysfunction scores were simple and useful in assessing multiple organ dysfunction and in predicting hospital mortality rates of patients with severe acute pancreatitis.