Are adolescents more vulnerable to the harmful effects of cannabis than adults? A placebo-controlled study in human males 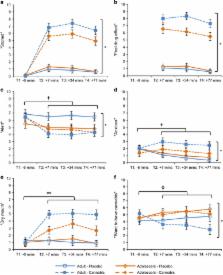 Preclinical research demonstrates that cannabinoids have differing effects in adolescent and adult animals. Whether these findings translate to humans has not yet been investigated. Here we believe we conducted the first study to compare the acute effects of cannabis in human adolescent ( n=20; 16–17 years old) and adult ( n=20; 24–28 years old) male cannabis users, in a placebo-controlled, double-blind cross-over design. After inhaling vaporized active or placebo cannabis, participants completed tasks assessing spatial working memory, episodic memory and response inhibition, alongside measures of blood pressure and heart rate, psychotomimetic symptoms and subjective drug effects (for example, ‘stoned', ‘want to have cannabis'). Results showed that on active cannabis, adolescents felt less stoned and reported fewer psychotomimetic symptoms than adults. Further, adults but not adolescents were more anxious and less alert during the active cannabis session (both pre- and post-drug administration). Following cannabis, cognitive impairment (reaction time on spatial working memory and prose recall following a delay) was greater in adults than adolescents. By contrast, cannabis impaired response inhibition accuracy in adolescents but not in adults. Moreover, following drug administration, the adolescents did not show satiety; instead they wanted more cannabis regardless of whether they had taken active or placebo cannabis, while the opposite was seen for adults. These contrasting profiles of adolescent resilience (blunted subjective, memory, physiological and psychotomimetic effects) and vulnerability (lack of satiety, impaired inhibitory processes) show some degree of translation from preclinical findings, and may contribute to escalated cannabis use by human adolescents.

Douglas Noll,  David J. Cohen,  Elisabeth E. L. Nyström … (1996)
Although recent neuroimaging studies suggest that prefrontal cortex (PFC) is involved in working memory (WM), the relationship between PFC activity and memory load has not yet been well-described in humans. Here we use functional magnetic resonance imaging (fMRI) to probe PFC activity during a sequential letter task in which memory load was varied in an incremental fashion. In all nine subjects studied, dorsolateral and left inferior regions of PFC were identified that exhibited a linear relationship between activity and WM load. Furthermore, these same regions were independently identified through direct correlations of the fMRI signal with a behavioral measure that indexes WM function during task performance. A second experiment, using whole-brain imaging techniques, both replicated these findings and identified additional brain regions showing a linear relationship with load, suggesting a distributed circuit that participates with PFC in subserving WM. Taken together, these results provide a "dose-response curve" describing the involvement of both PFC and related brain regions in WM function, and highlight the benefits of using graded, parametric designs in neuroimaging research.