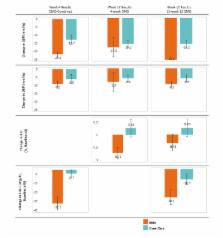 Participants with elevated systolic BP (SBP ≥140 mm Hg) and HbA1c (≥7%) failing antihypertensive (≥2 medications) and oral diabetes therapy were enrolled in this three-arm, 12-week, cluster-randomized study. Participants used DMO (includes digital medicines, the wearable sensor patch, and the mobile device app) for 4 or 12 weeks or received usual care based on site randomization. Providers in the DMO arms could review the DMO data via a Web portal. In all three arms, providers were instructed to make medical decisions (medication titration, adherence counseling, education, and lifestyle coaching) on all available clinical information at each visit. Primary outcome was change in SBP at week 4. Other outcomes included change in SBP and HbA1c at week 12, and low-density lipoprotein cholesterol (LDL-C) and diastolic blood pressure (DBP) at weeks 4 and 12, as well as proportion of patients at BP goal (<140/90 mm Hg) at weeks 4 and 12, medical decisions, and medication adherence patterns.

Judith Hibbard, Jessica Greene, Valerie Overton (2013)
Patient activation is a term that describes the skills and confidence that equip patients to become actively engaged in their health care. Health care delivery systems are turning to patient activation as yet another tool to help them and their patients improve outcomes and influence costs. In this article we examine the relationship between patient activation levels and billed care costs. In an analysis of 33,163 patients of Fairview Health Services, a large health care delivery system in Minnesota, we found that patients with the lowest activation levels had predicted average costs that were 8 percent higher in the base year and 21 percent higher in the first half of the next year than the costs of patients with the highest activation levels, both significant differences. What's more, patient activation was a significant predictor of cost even after adjustment for a commonly used "risk score" specifically designed to predict future costs. As health care delivery systems move toward assuming greater accountability for costs and outcomes for defined patient populations, knowing patients' ability and willingness to manage their health will be a relevant piece of information integral to health care providers' ability to improve outcomes and lower costs.

(2011)
Hypertension is a modifiable risk factor for cardiovascular disease. It affects one in three adults in the United States and contributes to one out of every seven deaths and nearly half of all cardiovascular disease-related deaths in the United States. CDC analyzed data from the National Health and Nutrition Examination Survey (NHANES) on the prevalence, treatment, and control of hypertension among U.S. adults aged ≥18 years. Hypertension was defined as an average blood pressure ≥140/90 mmHg or the current use of blood pressure-lowering medication. Control of hypertension was reported as an average treated systolic/diastolic blood pressure <140/90 mmHg. Multivariate analysis was performed to assess changes in prevalence of hypertension, use of pharmacologic treatment, and control of blood pressure between the 1999-2002 and 2005-2008 survey cycles. During 2005-2008, approximately 68 million (31%) U.S. adults aged ≥18 years had hypertension, and this prevalence has shown no improvement in the past decade. Of these adults, 48 million (70%) were receiving pharmacologic treatment and 31 million (46%) had their condition controlled. Although 86% of adults with uncontrolled blood pressure had medical insurance, the prevalence of blood pressure control among adults with hypertension was especially low among participants who did not have a usual source of medical care (12%), received medical care less than twice in the previous year (21%), or did not have health insurance (29%). Control prevalence also was low among young adults (31%) and Mexican Americans (37%). Although the prevalence of hypertension did not change from 1999-2002 to 2005-2008, significant increases were observed in the prevalence of treatment and control. Hypertension affects millions of persons in the United States, and less than half of those with hypertension have their condition controlled. Prevalence of treatment and control are even lower among persons who do not have a usual source of medical care, those who are not receiving regular medical care, and those who do not have health insurance. To improve blood pressure control in the United States, a comprehensive approach is needed that involves policy and system changes to improve health-care access, quality of preventive care, and patient adherence to treatment. Nearly 90% of persons with uncontrolled hypertension have health insurance, indicating a need for health-care system improvements. Health-care system improvements, including use of electronic health records with registry and clinical decision support functions, could facilitate better treatment and follow-up management, and improve patient-physician interaction. Allied health professionals (e.g., nurses, dietitians, health educators and pharmacists) could help increase patient adherence to medications. Patient adoption of healthy behaviors could improve their blood pressure control. Reducing dietary intake of salt would greatly support prevention and control of hypertension; a 32% decrease in average daily consumption, from 3,400 mg to 2,300 mg, could reduce hypertension by as many as 11 million cases. Further reductions in sodium intake to 1,500 mg/day could reduce hypertension by 16.4 million cases.

This is an open-access article distributed under the terms of the Creative Commons Attribution License ( https://creativecommons.org/licenses/by/4.0/), which permits unrestricted use, distribution, and reproduction in any medium, provided the original work, first published in the Journal of Medical Internet Research, is properly cited. The complete bibliographic information, a link to the original publication on http://www.jmir.org/, as well as this copyright and license information must be included.