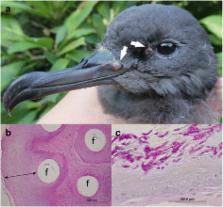 Over the past 20 years, many marine seabird populations have been gradually declining and the factors driving this ongoing deterioration are not always well understood. Avipoxvirus infections have been found in a wide range of bird species worldwide, however, very little is known about the disease ecology of avian poxviruses in seabirds. Here we present two novel avipoxviruses from pacific shearwaters ( Ardenna spp), one from a Flesh-footed Shearwater ( A. carneipes) (SWPV-1) and the other from a Wedge-tailed Shearwater ( A. pacificus) (SWPV-2).

Epidermal pox lesions, liver, and blood samples were examined from A. carneipes and A. pacificus of breeding colonies in eastern Australia. After histopathological confirmation of the disease, PCR screening was conducted for avipoxvirus, circovirus, reticuloendotheliosis virus, and fungal agents. Two samples that were PCR positive for poxvirus were further assessed by next generation sequencing, which yielded complete Shearwaterpox virus (SWPV) genomes from A. pacificus and A. carneipes, both showing the highest degree of similarity with Canarypox virus (98% and 67%, respectively). The novel SWPV-1 complete genome from A. carneipes is missing 43 genes compared to CNPV and contains 4 predicted genes which are not found in any other poxvirus, whilst, SWPV-2 complete genome was deemed to be missing 18 genes compared to CNPV and a further 15 genes significantly fragmented as to probably cause them to be non-functional.

These are the first avipoxvirus complete genome sequences that infect marine seabirds. In the comparison of SWPV-1 and −2 to existing avipoxvirus sequences, our results indicate that the SWPV complete genome from A. carneipes (SWPV-1) described here is not closely related to any other avipoxvirus genome isolated from avian or other natural host species, and that it likely should be considered a separate species.

Christopher Lowe,  P Solomon,  Joseph Spatafora … (2007)
Stagonospora nodorum is a major necrotrophic fungal pathogen of wheat (Triticum aestivum) and a member of the Dothideomycetes, a large fungal taxon that includes many important plant pathogens affecting all major crop plant families. Here, we report the acquisition and initial analysis of a draft genome sequence for this fungus. The assembly comprises 37,164,227 bp of nuclear DNA contained in 107 scaffolds. The circular mitochondrial genome comprises 49,761 bp encoding 46 genes, including four that are intron encoded. The nuclear genome assembly contains 26 classes of repetitive DNA, comprising 4.5% of the genome. Some of the repeats show evidence of repeat-induced point mutations consistent with a frequent sexual cycle. ESTs and gene prediction models support a minimum of 10,762 nuclear genes. Extensive orthology was found between the polyketide synthase family in S. nodorum and Cochliobolus heterostrophus, suggesting an ancient origin and conserved functions for these genes. A striking feature of the gene catalog was the large number of genes predicted to encode secreted proteins; the majority has no meaningful similarity to any other known genes. It is likely that genes for host-specific toxins, in addition to ToxA, will be found among this group. ESTs obtained from axenic mycelium grown on oleate (chosen to mimic early infection) and late-stage lesions sporulating on wheat leaves were obtained. Statistical analysis shows that transcripts encoding proteins involved in protein synthesis and in the production of extracellular proteases, cellulases, and xylanases predominate in the infection library. This suggests that the fungus is dependant on the degradation of wheat macromolecular constituents to provide the carbon skeletons and energy for the synthesis of proteins and other components destined for the developing pycnidiospores.

Kellie N Smith,  Caroline Gubser,  Paul Kellam … (2003)
The evolutionary relationships of 26 sequenced members of the poxvirus family have been investigated by comparing their genome organization and gene content and by using DNA and protein sequences for phylogenetic analyses. The central region of the genome of chordopoxviruses (ChPVs) is highly conserved in gene content and arrangement, except for some gene inversions in Fowlpox virus (FPV) and species-specific gene insertions in FPV and Molluscum contagiosum virus (MCV). In the central region 90 genes are conserved in all ChPVs, but no gene from near the termini is conserved throughout the subfamily. Inclusion of two entomopoxvirus (EnPV) sequences reduces the number of conserved genes to 49. The EnPVs are divergent from ChPVs and between themselves. Relationships between ChPV genera were evaluated by comparing the genome size, number of unique genes, gene arrangement and phylogenetic analyses of protein sequences. Overall, genus Avipoxvirus is the most divergent. The next most divergent ChPV genus is Molluscipoxvirus, whose sole member, MCV, infects only man. The Suipoxvirus, Capripoxvirus, Leporipoxvirus and Yatapoxvirus genera cluster together, with Suipoxvirus and Capripoxvirus sharing a common ancestor, and are distinct from the genus Orthopoxvirus (OPV). Within the OPV genus, Monkeypox virus, Ectromelia virus and Cowpox virus strain Brighton Red (BR) do not group closely with any other OPV, Variola virus and Camelpox virus form a subgroup, and Vaccinia virus is most closely related to CPV-GRI-90. This suggests that CPV-BR and GRI-90 should be separate species.