Satraplatin in the treatment of hormone-refractory metastatic prostate cancer 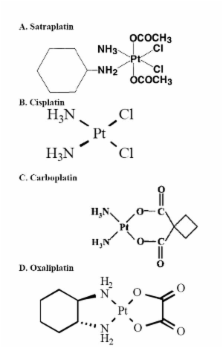 Satraplatin is an orally bioavailable platinum chemotherapeutic agent under development for several cancer types, including hormone-refractory prostate cancer (HRPC). Satraplatin is being developed for the treatment of men with chemorefractory HRPC for several reasons: 1) relative ease of administration, 2) potential lack of cross-resistance with other platinum agents, 3) clinical benefits seen in early studies of HRPC, and 4) an unmet need in this patient population after docetaxel failure. As men who have progressed after docetaxel and prednisone have an expected median survival of approximately 12 months, there is great opportunity for improved palliation in this disease. Satraplatin may provide a palliative benefit for these men in terms of progression-free survival according to the most recent analyses of the phase III SPARC trial comparing satraplatin and prednisone to prednisone alone in the second-line setting for HRPC, and is currently under USFDA review for this indication. Whether satraplatin and prednisone offer an advantage over docetaxel retreatment or other cytotoxic agents in this setting is an unanswered question and worthy of study. Investigation of predictors of platinum sensitivity and the use of satraplatin in patients with neuroendocrine subsets of metastatic prostate cancer may be warranted given the advances in biomarker and genomic technology and the known sensitivity of small cell cancers to platinum agents. Further study of satraplatin alone or in combination with docetaxel or other molecular and chemotherapeutic agents seems warranted to improve on current outcomes.

Geoffrey Ginsburg,  Andrea Bild,  J R Nevins … (2006)
Clinical trials have indicated a benefit of adjuvant chemotherapy for patients with stage IB, II, or IIIA--but not stage IA--non-small-cell lung cancer (NSCLC). This classification scheme is probably an imprecise predictor of the prognosis of an individual patient. Indeed, approximately 25 percent of patients with stage IA disease have a recurrence after surgery, suggesting the need to identify patients in this subgroup for more effective therapy. We identified gene-expression profiles that predicted the risk of recurrence in a cohort of 89 patients with early-stage NSCLC (the lung metagene model). We evaluated the predictor in two independent groups of 25 patients from the American College of Surgeons Oncology Group (ACOSOG) Z0030 study and 84 patients from the Cancer and Leukemia Group B (CALGB) 9761 study. The lung metagene model predicted recurrence for individual patients significantly better than did clinical prognostic factors and was consistent across all early stages of NSCLC. Applied to the cohorts from the ACOSOG Z0030 trial and the CALGB 9761 trial, the lung metagene model had an overall predictive accuracy of 72 percent and 79 percent, respectively. The predictor also identified a subgroup of patients with stage IA disease who were at high risk for recurrence and who might be best treated by adjuvant chemotherapy. The lung metagene model provides a potential mechanism to refine the estimation of a patient's risk of disease recurrence and, in principle, to alter decisions regarding the use of adjuvant chemotherapy in early-stage NSCLC. Copyright 2006 Massachusetts Medical Society.

Phase III Trial of Satraplatin, an Oral Platinum plus Prednisone vs. Prednisone alone in Patients with Hormone-Refractory Prostate Cancer

C.N. Sternberg,  P Whelan,  J. Hetherington … (2005)
Satraplatin is a novel oral platinum (IV) complex that shows activity against hormone-refractory prostate cancer (HRPC) in cisplatin-resistant human tumor lines in phase I and phase II trials [1]. A randomized multicenter phase III trial with a target sample size of 380 patients was initiated in men with HRPC. After 50 randomized patients, the trial was closed to further accrual by the sponsoring company. An ad hoc analysis of all available data is reported here. Eligibility criteria included pathological proof of prostate cancer, documented progression despite prior hormonal manipulation, WHO PS 0–2, and no daily intake of narcotic analgesics. Patients were randomized between satraplatin 100 mg/m 2 for 5 days plus prednisone 10 mg orally BID or prednisone alone. Compliance was excellent. 48/50 patients have progressed and 42 have died, mostly due to prostate cancer. Median overall survival was 14.9 months (95% CI: 13.7–28.4) on the satraplatin plus prednisone arm and 11.9 months (95% CI: 8.4–23.1) on prednisone alone (hazard ratio, HR = 0.84, 95% CI: 0.46–1.55). A >50% decrease in prostrate specific antigen (PSA) was seen in 9/27 (33.3%) in the satraplatin plus prednisone arm vs. 2/23 (8.7%) on the prednisone alone arm. Progression-free survival was 5.2 months (95% CI: 2.8–13.7) on the satraplatin plus prednisone arm as compared to 2.5 months (95% CI: 2.1– 4.7) on the prednisone alone arm (HR = 0.50, 95% CI: 0.28–0.92). This difference is statistically significant (p = 0.023). Toxicity was generally minimal in both arms. This randomized comparison of a combination of satraplatin and prednisone versus prednisone alone supports the antitumor activity of the combination. Its role in the treatment of HPRC remains to be elucidated in an appropriate phase III setting.