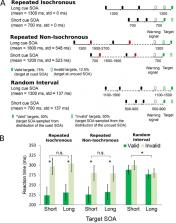 Many group-living animals, humans included, occasionally synchronize their behavior with that of conspecifics. Social psychology and neuroscience have attempted to explain this phenomenon. Here we sought to integrate results around three themes: the stimuli, the mechanisms and the benefits of interactional synchrony. As regards stimuli, we asked what characteristics, apart from temporal regularity, prompt synchronization and found that stimulus modality and complexity are important. The high temporal resolution of the auditory system and the relevance of socio-emotional information endow auditory, multimodal, emotional and somewhat variable and adaptive sequences with particular synchronizing power. Looking at the mechanisms revealed that traditional perspectives emphasizing beat-based representations of others’ signals conflict with more recent work investigating the perception of temporal regularity. Timing processes supported by striato-cortical loops represent any kind of repetitive interval sequence fairly automatically. Additionally, socio-emotional processes supported by posterior superior temporal cortex help endow such sequences with value motivating the extent of synchronizing. Synchronizing benefits arise from an increased predictability of incoming signals and include many positive outcomes ranging from basic information processing at the individual level to the bonding of dyads and larger groups.

What makes us tick? Functional and neural mechanisms of interval timing.

Warren Meck,  Catalin Buhusi (2005)
Time is a fundamental dimension of life. It is crucial for decisions about quantity, speed of movement and rate of return, as well as for motor control in walking, speech, playing or appreciating music, and participating in sports. Traditionally, the way in which time is perceived, represented and estimated has been explained using a pacemaker-accumulator model that is not only straightforward, but also surprisingly powerful in explaining behavioural and biological data. However, recent advances have challenged this traditional view. It is now proposed that the brain represents time in a distributed manner and tells the time by detecting the coincidental activation of different neural populations.

Predictive coding: an account of the mirror neuron system.

Karl Friston,  Philip J Kilner,  Christopher D. Frith (2007)
Is it possible to understand the intentions of other people by simply observing their actions? Many believe that this ability is made possible by the brain's mirror neuron system through its direct link between action and observation. However, precisely how intentions can be inferred through action observation has provoked much debate. Here we suggest that the function of the mirror system can be understood within a predictive coding framework that appeals to the statistical approach known as empirical Bayes. Within this scheme the most likely cause of an observed action can be inferred by minimizing the prediction error at all levels of the cortical hierarchy that are engaged during action observation. This account identifies a precise role for the mirror system in our ability to infer intentions from actions and provides the outline of the underlying computational mechanisms.

Yi Su,  Bruno H. Repp (2013)
Sensorimotor synchronization (SMS) is the coordination of rhythmic movement with an external rhythm, ranging from finger tapping in time with a metronome to musical ensemble performance. An earlier review (Repp, 2005) covered tapping studies; two additional reviews (Repp, 2006a, b) focused on music performance and on rate limits of SMS, respectively. The present article supplements and extends these earlier reviews by surveying more recent research in what appears to be a burgeoning field. The article comprises four parts, dealing with (1) conventional tapping studies, (2) other forms of moving in synchrony with external rhythms (including dance and nonhuman animals' synchronization abilities), (3) interpersonal synchronization (including musical ensemble performance), and (4) the neuroscience of SMS. It is evident that much new knowledge about SMS has been acquired in the last 7 years.