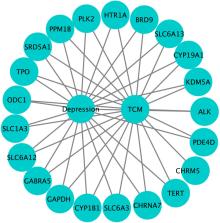 Depression is known as “Yu Zheng” in traditional Chinese medicine (TCM). Jiuwei Zhenxin granules (JZG) is a type of TCM. According to TCM theory, it nourishes the heart and spleen, tonifies Qi, and tranquilizes the spirit, and may also has effects in the treatment of depression. Here, we systematically reviewed recent basic and clinical experimental studies of JZG and depression, including studies of the pharmacological mechanisms, active ingredients, and clinical applications of JZG in depression treatment. This review will deepen our understanding of the pharmacological mechanisms, drug interactions, and clinical applications of TCM prescriptions and provide a basis for the development of new drugs in the treatment of depression.

Dysregulation of the dopamine system in the pathophysiology of schizophrenia and depression.

Anthony Grace (2016)
The dopamine system is unique among the brain's modulatory systems in that it has discrete projections to specific brain regions involved in motor behaviour, cognition and emotion. Dopamine neurons exhibit several activity patterns - including tonic and phasic firing - that are determined by a combination of endogenous pacemaker conductances and regulation by multiple afferent systems. Emerging evidence suggests that disruptions in these regulatory systems may underlie the pathophysiology of several psychiatric disorders, including schizophrenia and depression.

Effects of intravenous ketamine on explicit and implicit measures of suicidality in treatment-resistant depression.

Rebecca B Price,  Matthew Nock,  Dennis Charney … (2009)
Intravenous ketamine has shown rapid antidepressant effects in early trials, making it a potentially attractive candidate for depressed patients at imminent risk of suicide. The Implicit Association Test (IAT), a performance-based measure of association between concepts, may have utility in suicide assessment. Twenty-six patients with treatment-resistant depression were assessed using the suicidality item of the Montgomery-Asberg Depression Rating Scale (MADRS-SI) 2 hours before and 24 hours following a single subanesthetic dose of intravenous ketamine. Ten patients also completed IATs assessing implicit suicidal associations at comparable time points. In a second study, nine patients received thrice-weekly ketamine infusions over a 12-day period. Twenty-four hours after a single infusion, MADRS-SI scores were reduced on average by 2.08 points on a 0 to 6 scale (p < .001; d = 1.37), and 81% of patients received a rating of 0 or 1 postinfusion. Implicit suicidal associations were also reduced following ketamine (p = .003; d = 1.36), with reductions correlated across implicit and explicit measures. MADRS-SI reductions were sustained for 12 days by repeated-dose ketamine (p < .001; d = 2.42). These preliminary findings support the premise that ketamine has rapid beneficial effects on suicidal cognition and warrants further study.

Mental health: a world of depression.

There is no funding to report.