A case of probable oxybutynin-induced increase in liver enzymes 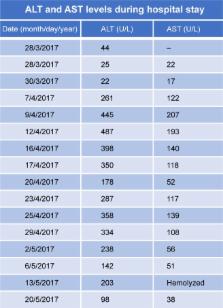 We describe the case of a 49-year-old male who presented to the emergency department with right-sided weakness and inability to speak. He was diagnosed with stroke and was admitted to Qatar Rehabilitation Institute after he was treated for the acute phase at Hamad General Hospital. As part of his management, he was started on oxybutynin 5 mg orally twice daily for the treatment of overactive bladder. Within a week, his liver enzymes started to increase. After a thorough medication review, oxybutynin was suspended as it was the only suspected medication to be responsible of this elevation in liver enzymes. When Naranjo Adverse Drug Reaction Probability Scale was used to assess the probability of an adverse drug reaction (ADR), a score of 6 was obtained indicating a “Probable” ADR. In conclusion, this is the first published report of oxybutynin-induced elevation in liver enzymes. Further reports are required to highlight this probable ADR and alert all health professionals about it.

Christian Guilleminet,  Catherine Sgro,  Christian Allard … (2002)
The incidence of hepatic adverse drug reactions (ADRs) remains unknown in the general population. The goal of this population-based study was to assess the incidence and seriousness of hepatic ADRs. All new cases of symptomatic drug-induced hepatic injuries were collected by 139 trained physicians (general practitioners [GPs] and specialists) between November 1997 and November 2000 in an area containing 81,301 inhabitants who could not go elsewhere for medical care. Over 3 years, 34 cases of hepatic ADRs were collected, 82% of them in outpatients. Global crude annual incidence rate was 13.9 +/- 2.4 per 100,000 inhabitants; corresponding standardized annual global rate was 8.1 +/- 1.5. There was no difference between urban and rural areas. Standardized incidence female/male ratio was 0.86 (0.26-2.90) until 49 years of age and 2.62 (1.00-6.92) after this age. Diagnosis was carried out by GPs in half of the cases. The outcome was recovery for 32 patients and death for 2. The main drugs implicated were anti-infectious, psychotropic, hypolipidemic agents, and nonsteroidal anti-inflammatory drugs (NSAIDs). Our results suggest that the number of hepatic ADRs in the French population would be 16 times greater than the number noted by spontaneous reporting to French regulatory authorities. In conclusion, the incidence and seriousness of drug-induced hepatitis are largely underestimated in the general population. These results may be useful for further evaluation of drug-induced hepatotoxicity.

Einar Stefan Björnsson,  Evangelos Kalaitzakis,  I Jacobsen (2012)
Limited data exist on drug-induced liver injury (DILI) associated with statins. Reports on adverse reactions suspected to be due to statins received by the Swedish Adverse Drug Reactions Advisory Committe 1988-2010 were analyzed. Only cases with >5×upper limit of normal (ULN) in aminotransferases and/or alkaline phosphatase >2×ULN were included. The most common types of ADRs suspected were DILI in 124/217 (57%) cases. A total of 73/124 (59%) cases had at least possible relationship, median age 64 years (57-73), 55% males, whereas 25/124 cases (20%) were excluded due to mild elevations of liver tests and 26 due to unlikely relationship and/or lack of data. A statin-related DILI episode was reported in 1.2/100,000 users. Atorvastatin was implicated in 30/73 (41%) cases, simvastatin in 28 (38%), fluvastatin (15%), and others. Two patients died of acute liver failure, one underwent liver transplantation and 25 (34%) had jaundice. Three patients were rechallenged with the same statin producing similar patterns of liver injury. The median duration of therapy was 90 days (30-120), 120 (39-248) for atorvastatin, and 75 (30-150) for simvastatin (NS). Cholestatic/mixed injury was more common with atorvastatin, 17/30 (56%) than with simvastatin, 7/28 (24%) (p=0.018). Idiosyncratic liver injury associated with statins is rare but can be severe. After recovery, a similar pattern of liver injury can be reproduced on re-exposure. Most patients experience liver injury 3-4 months after start of therapy. Atorvastatin is mostly associated with cholestatic liver injury whereas hepatocellular injury is more common with simvastatin. Copyright © 2011 European Association for the Study of the Liver. Published by Elsevier B.V. All rights reserved.

The prevalence and predictors of elevated serum aminotransferase activity in the United States in 1999-2002.