Anti-neutrophil cytoplasmic antibody-associated glomerulonephritis with detection of myeloperoxidase and phospholipase A 2 receptor in membranous nephropathy-lesions: report of two patients with microscopic polyangiitis 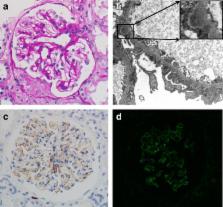 Podocyte phospholipase A 2 receptor (PLA 2R) is a major target antigen in idiopathic adult membranous nephropathy (MN). Histological PLA 2R staining in the renal tissue has proven to be useful for the detection of idiopathic MN. However, glomerular PLA 2R deposits have also been recently observed in several patients with secondary MN, such as hepatitis B virus-associated, hepatitis C virus-associated, and neoplasm-associated MN. Certain inflammatory environments have been suggested to lead to abnormal expression of PLA 2R epitopes, with the resulting production of PLA 2R autoantibodies.

We report two patients diagnosed with anti-neutrophil cytoplasmic antibody (ANCA)-associated glomerulonephritis with MN-lesions, in whom ANCA titers for myeloperoxidase (MPO) were persistently positive. The first patient was a 52-years-old man who presented with interstitial pneumonitis. Microscopic hematuria and proteinuria were found when the interstitial pneumonitis became more severe. Renal biopsy findings yielded a diagnosis of ANCA-associated glomerulonephritis (mixed class) with MN-lesions. The second patient was a 63-years-old woman who had been treated for relapsing polychondritis. Her renal tissue showed evidence of focal ANCA-associated glomerulonephritis with MN-lesions. Interestingly, both MPO and PLA 2R were detected in the glomerular subepithelial deposits of both patients. Immunoglobulin G (IgG) 1 and IgG2 were positive in the glomeruli of patient 2, and all subclasses of IgGs were positive in patient 1.

The present cases suggest that ANCA-associated glomerulonephritis could expose PLA 2R, leading to the development of MN-lesions.

Kidney biopsy is a sensitive tool for retrospective diagnosis of PLA2R-related membranous nephropathy.

Pierre Ronco,  Barbora Svobodová,  Eva Honsová … (2013)
Antibodies against M-type phospholipase A2 receptor (PLA2R) are serological markers of disease activity in patients with idiopathic membranous nephropathy (iMN). To determine the most sensitive test for the diagnosis of PLA2R-related membranous nephropathy (MN) irrespective of sampling time, we investigated the presence of PLA2R in glomerular immune deposits and assessed circulating anti-PLA2R antibodies in a retrospective cohort of Czech patients with idiopathic, lupus and other few secondary MN. We tested archival paraffin-embedded kidney biopsies of 84 consecutive patients with biopsy-proven MN, for the presence of PLA2R in glomerular immune deposits and we measured circulating anti-PLA2R antibodies using the indirect immunofluorescence test, all reagents being commercially available. In 45 of 65 (69%) patients with iMN, PLA2R was detected in a finely granular pattern in sub-epithelial deposits along glomerular capillary loops. Circulating anti-PLA2R antibodies were detected in 20 of 31 (65%) sera from patients sampled during active disease. Six patients with active disease were negative for circulating anti-PLA2R antibodies despite PLA2R antigen positivity in the kidney biopsies. Only 8 of 37 (22%) sera sampled at the time of remission were PLA2R positive while PLA2R antigen was found in 22 of the 37 (59%) corresponding biopsies. PLA2R was found in immune deposits in 3 patients with secondary MN (2 with hepatitis B, and 1 with sarcoidosis) but in none of the 16 patients with lupus. In case of delayed serum sampling, assessment of PLA2R antigen in biopsy specimens is more sensitive than the serological test for the diagnosis of PLA2R-related MN which can be established retrospectively.

G. Markowitz,  M. Stokes,  N Masani … (2009)
Only rare cases of concurrent membranous glomerulonephritis (MGN) and antineutrophil cytoplasmic antibody (ANCA)-associated necrotizing and crescentic glomerulonephritis (NCGN) have been reported. The authors report the clinical and pathologic findings in 14 patients with MGN and ANCA-associated NCGN. The cohort consisted of eight men and six women with a mean age of 58.7 yr. ANCA positivity was documented by indirect immunofluorescence or ELISA in all patients. Indirect immunofluorescence was positive in 13 patients (seven P-ANCA, five C-ANCA, one atypical ANCA). ELISA was positive in nine of 10 patients (five MPO-ANCA, three PR3-ANCA, one MPO- and PR3-ANCA). Clinical presentation included heavy proteinuria (mean 24-hr urine protein 6.5 g/d), hematuria, and acute renal failure (mean creatinine 4.4 mg/dl). Pathologic evaluation revealed MGN and NCGN, with crescents involving a mean of 32% of glomeruli. On ultrastructural evaluation, the majority of cases showed stage I or II membranous changes. Follow-up was available for 13 patients, 12 of whom were treated with steroids and cyclophosphamide. At a mean follow-up of 24.3 mo, five patients progressed to ESRD, seven had stabilization or improvement in renal function, and one had worsening renal function. Five patients, including three with ESRD, died during the follow-up period. The only independent predictor of progression to ESRD was serum creatinine at biopsy. MGN with ANCA-associated NCGN is a rare dual glomerulopathy seen in patients with heavy proteinuria, acute renal failure, and active urine sediment. Prognosis is variable, with 50% of patients reaching endpoints of ESRD or death.