Striatal phosphodiesterase 10A and medial prefrontal cortical thickness in patients with schizophrenia: a PET and MRI study 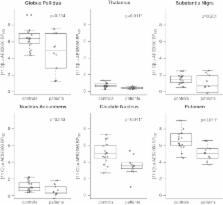 The enzyme phosphodiesterase 10A (PDE10A) is abundant in striatal medium spiny neurons and has been implicated in the pathophysiology of schizophrenia in animal models and is investigated as a possible new pharmacological treatment target. A reduction of prefrontal cortical thickness is common in schizophrenia, but how this relates to PDE10A expression is unknown. Our study aim was to compare, we believe for the first time, the striatal non-displaceable binding potential (BP ND) of the new validated PDE10A ligand [ 11C]Lu AE92686 between patients with schizophrenia and healthy controls. Furthermore, we aimed to assess the correlation of PDE10A BP ND to cortical thickness. Sixteen healthy male controls and 10 male patients with schizophrenia treated with clozapine, olanzapine or quetiapine were investigated with positron emission tomography (PET) and magnetic resonance imaging (MRI). Striatal binding potential (BP ND) of [ 11C]Lu AE92686 was acquired through dynamic PET scans and cortical thickness by structural MRI. Clinical assessments of symptoms and cognitive function were performed and the antipsychotic dosage was recorded. Patients with schizophrenia had a significantly lower BP ND of [ 11C]Lu AE92686 in striatum ( P=0.003) than healthy controls. The striatal BP ND significantly correlated to cortical thickness in the medial prefrontal cortex and superior frontal gyrus across patients with schizophrenia and healthy controls. No significant correlation was observed between the BP ND for [ 11C]Lu AE92686 in striatum and age, schizophrenia symptoms, antipsychotic dosage, coffee consumption, smoking, duration of illness or cognitive function in the patients. In conclusion, PDE10A may be important for functioning in the striato-cortical interaction and in the pathophysiology of schizophrenia.

Jessica J. Cunningham,  Patrick S Hume,  Adriaan Lammertsma … (1997)
A method is presented for the generation of parametric images of radioligand-receptor binding using PET. The method is based on a simplified reference region compartmental model, which requires no arterial blood sampling, and gives parametric images of both the binding potential of the radioligand and its local rate of delivery relative to the reference region. The technique presented for the estimation of parameters in the model employs a set of basis functions which enables the incorporation of parameter bounds. This basis function method (BFM) is compared with conventional nonlinear least squares estimation of parameters (NLM), using both simulated and real data. BFM is shown to be more stable than NLM at the voxel level and is computationally much faster. Application of the technique is illustrated for three radiotracers: [11C]raclopride (a marker of the D2 receptor), [11C]SCH 23390 (a marker of the D1 receptor) in human studies, and [11C]CFT (a marker of the dopamine transporter) in rats. The assumptions implicit in the model and its implementation using BFM are discussed. Copyright 1997 Academic Press.

Goal representations and motivational drive in schizophrenia: the role of prefrontal-striatal interactions.

Deanna Barch,  Erin Dowd (2010)
The past several years have seen a resurgence of interest in understanding the psychological and neural bases of what are often referred to as "negative symptoms" in schizophrenia. These aspects of schizophrenia include constructs such as asociality, avolition (a reduction in the motivation to initiate or persist in goal-directed behavior), and anhedonia (a reduction in the ability to experience pleasure). We believe that these dimensions of impairment in individuals with schizophrenia reflect difficulties using internal representations of emotional experiences, previous rewards, and motivational goals to drive current and future behavior in a way that would allow them to obtain desired outcomes, a deficit that has major clinical significance in terms of functional capacity. In this article, we review the major components of the systems that link experienced and anticipated rewards with motivated behavior that could potentially be impaired in schizophrenia. We conclude that the existing evidence suggests relatively intact hedonics in schizophrenia, but impairments in some aspects of reinforcement learning, reward prediction, and prediction error processing, consistent with an impairment in "wanting." As of yet, there is only indirect evidence of impairment in anterior cingulate and orbital frontal function that may support value and effort computations. However, there are intriguing hints that individuals with schizophrenia may not be able to use reward information to modulate cognitive control and dorsolateral prefrontal cortex function, suggesting a potentially important role for cortical-striatal interactions in mediating impairment in motivated and goal-directed behavior in schizophrenia.