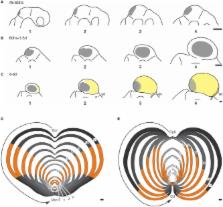 The central nervous system areas displaying the highest structural and functional complexity correspond to the so called cortices, i.e., concentric alternating neuronal and fibrous layers. Corticogenesis, i.e., the development of the cortical organization, depends on the temporal-spatial organization of several developmental events: (a) the duration of the proliferative phase of the neuroepithelium, (b) the relative duration of symmetric (expansive) versus asymmetric (neuronogenic) sub phases, (c) the spatial organization of each kind of cell division, (e) the time of determination and cell cycle exit and (f) the time of onset of the post-mitotic neuronal migration and (g) the time of onset of the neuronal structural and functional differentiation. The first five events depend on molecular mechanisms that perform a fine tuning of the proliferative activity. Changes in any of them significantly influence the cortical size or volume (tangential expansion and radial thickness), morphology, architecture and also impact on neuritogenesis and synaptogenesis affecting the cortical wiring. This paper integrates information, obtained in several species, on the developmental roles of cell proliferation in the development of the optic tectum (OT) cortex, a multilayered associative area of the dorsal (alar) midbrain. The present review (1) compiles relevant information on the temporal and spatial organization of cell proliferation in different species (fish, amphibians, birds, and mammals), (2) revises the main molecular events involved in the isthmic organizer (IsO) determination and localization, (3) describes how the patterning installed by IsO is translated into spatially organized neural stem cell proliferation (i.e., by means of growth factors, receptors, transcription factors, signaling pathways, etc.) and (4) describes the morpho- and histogenetic effect of a spatially organized cell proliferation in the above mentioned species. A brief section on the OT evolution is also included. This section considers how the differential operation of cell proliferation could explain differences among species.

Stephen Noctor,  Arnold R. Kriegstein,  Veronica Martinez Cerdeno (2006)
The dramatic evolutionary expansion of the cerebral cortex of Homo sapiens underlies our unique higher cortical functions, and therefore bears on the ultimate issue of what makes us human. Recent insights into developmental events during early proliferative stages of cortical development indicate how neural stem and progenitor cells might interact to produce cortical expansion during development, and could shed light on evolutionary changes in cortical structure.

A small step for the cell, a giant leap for mankind: a hypothesis of neocortical expansion during evolution.

Pasko Rakic (1995)
The more than 1000-fold increase in the cortical surface without a comparable increase in its thickness during mammalian evolution is explained in the context of the radial-unit hypothesis of cortical development. According to the proposed model, cortical expansion is the result of changes in proliferation kinetics that increase the number of radial columnar units without changing the number of neurons within each unit significantly. Thus, mutation of a regulatory gene(s) that controls the timing and ratio of symmetric and asymmetric modes of cell divisions in the proliferative zone, coupled with radial constraints in the distribution of migrating neurons, could create an expanded cortical plate with enhanced capacity for establishing new patterns of connectivity that are validated through natural selection.

Edited by: Tommaso Pizzorusso, University of Florence and Institute of Neuroscience CNR, Italy