A Toolbox for Representational Similarity Analysis 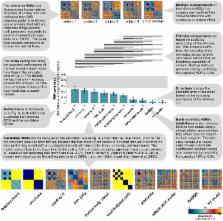 Neuronal population codes are increasingly being investigated with multivariate pattern-information analyses. A key challenge is to use measured brain-activity patterns to test computational models of brain information processing. One approach to this problem is representational similarity analysis (RSA), which characterizes a representation in a brain or computational model by the distance matrix of the response patterns elicited by a set of stimuli. The representational distance matrix encapsulates what distinctions between stimuli are emphasized and what distinctions are de-emphasized in the representation. A model is tested by comparing the representational distance matrix it predicts to that of a measured brain region. RSA also enables us to compare representations between stages of processing within a given brain or model, between brain and behavioral data, and between individuals and species. Here, we introduce a Matlab toolbox for RSA. The toolbox supports an analysis approach that is simultaneously data- and hypothesis-driven. It is designed to help integrate a wide range of computational models into the analysis of multichannel brain-activity measurements as provided by modern functional imaging and neuronal recording techniques. Tools for visualization and inference enable the user to relate sets of models to sets of brain regions and to statistically test and compare the models using nonparametric inference methods. The toolbox supports searchlight-based RSA, to continuously map a measured brain volume in search of a neuronal population code with a specific geometry. Finally, we introduce the linear-discriminant t value as a measure of representational discriminability that bridges the gap between linear decoding analyses and RSA. In order to demonstrate the capabilities of the toolbox, we apply it to both simulated and real fMRI data. The key functions are equally applicable to other modalities of brain-activity measurement. The toolbox is freely available to the community under an open-source license agreement ( http://www.mrc-cbu.cam.ac.uk/methods-and-resources/toolboxes/license/).

Distributed and overlapping representations of faces and objects in ventral temporal cortex.

J Haxby, M. I. Gobbini, M. Furey … (2001)
The functional architecture of the object vision pathway in the human brain was investigated using functional magnetic resonance imaging to measure patterns of response in ventral temporal cortex while subjects viewed faces, cats, five categories of man-made objects, and nonsense pictures. A distinct pattern of response was found for each stimulus category. The distinctiveness of the response to a given category was not due simply to the regions that responded maximally to that category, because the category being viewed also could be identified on the basis of the pattern of response when those regions were excluded from the analysis. Patterns of response that discriminated among all categories were found even within cortical regions that responded maximally to only one category. These results indicate that the representations of faces and objects in ventral temporal cortex are widely distributed and overlapping.