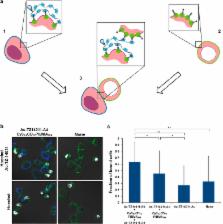 The use of mammalian cells for therapeutic applications is finding its way into modern medicine. However, modification or “training” of cells to make them suitable for a specific application remains complex. By envisioning a chemical toolbox that enables specific, but straight-forward and generic cellular functionalization, we investigated how membrane-receptor (pre)targeting could be combined with supramolecular host-guest interactions based on β-cyclodextrin (CD) and adamantane (Ad). The feasibility of this approach was studied in cells with membranous overexpression of the chemokine receptor 4 (CXCR4). By combining specific targeting of CXCR4, using an adamantane (Ad)-functionalized Ac-TZ14011 peptide (guest; K D = 56 nM), with multivalent host molecules that entailed fluorescent β-CD-Poly(isobutylene- alt-maleic-anhydride)-polymers with different fluorescent colors and number of functionalities, host-guest cell-surface modifications could be studied in detail. A second set of Ad-functionalized entities enabled introduction of additional surface functionalities. In addition, the attraction between CD and Ad could be used to drive cell-cell interactions. Combined we have shown that supramolecular interactions, that are based on specific targeting of an overexpressed membrane-receptor, allow specific and stable, yet reversible, surface functionalization of viable cells and how this approach can be used to influence the interaction between cells and their surroundings.

Special series on COVID-19 interactions with our Environment

Cong-Qiang Liu,  Peter Schultz (2009)
The development of new orthogonal aminoacyl-tRNA synthetase/tRNA pairs has led to the addition of approximately 70 unnatural amino acids (UAAs) to the genetic codes of Escherichia coli, yeast, and mammalian cells. These UAAs represent a wide range of structures and functions not found in the canonical 20 amino acids and thus provide new opportunities to generate proteins with enhanced or novel properties and probes of protein structure and function.

Matthias Stephan,  James Moon,  Soong Um … (2010)
A major limitation of cell therapies is the rapid decline in viability and function of transplanted cells. Here we describe a strategy to enhance cell therapy via the conjugation of adjuvant drug-loaded nanoparticles to the surfaces of therapeutic cells. Using this method to provide sustained pseudo-autocrine stimulation to donor cells, we elicited dramatic enhancements in tumor elimination in a model of adoptive T-cell therapy for cancer and increased the in vivo repopulation rate of hematopoietic stem cell grafts, using very low doses of adjuvant drugs that were ineffective when given systemically. This approach is a facile and generalizable strategy to augment cytoreagents while minimizing systemic side effects of adjuvant drugs. In addition, these results suggest therapeutic cells are promising vectors for actively targeted drug delivery.

Dietger Niederwieser,  M Horowitz,  Ayami Yoshimi … (2010)
Hematopoietic stem cell transplantation (HSCT) requires significant infrastructure. Little is known about HSCT use and the factors associated with it on a global level. To determine current use of HSCT to assess differences in its application and to explore associations of macroeconomic factors with transplant rates on a global level. Retrospective survey study of patients receiving allogeneic and autologous HSCTs for 2006 collected by 1327 centers in 71 participating countries of the Worldwide Network for Blood and Marrow Transplantation. The regional areas used herein are (1) the Americas (the corresponding World Health Organization regions are North and South America); (2) Asia (Southeast Asia and the Western Pacific Region, which includes Australia and New Zealand); (3) Europe (includes Turkey and Israel); and (4) the Eastern Mediterranean and Africa. Transplant rates (number of HSCTs per 10 million inhabitants) by indication, donor type, and country; description of main differences in HSCT use; and macroeconomic factors of reporting countries associated with HSCT rates. There were 50 417 first HSCTs; 21 516 allogeneic (43%) and 28 901 autologous (57%). The median HSCT rates varied between regions and countries from 48.5 (range, 2.5-505.4) in the Americas, 184 (range, 0.6-488.5) in Asia, 268.9 (range, 5.7-792.1) in Europe, and 47.7 (range, 2.8-95.3) in the Eastern Mediterranean and Africa. No HSCTs were performed in countries with less than 300,000 inhabitants, smaller than 960 km(2), or having less than US $680 gross national income per capita. Use of allogeneic or autologous HSCT, unrelated or family donors for allogeneic HSCT, and proportions of disease indications varied significantly between countries and regions. In linear regression analyses, government health care expenditures (r(2) = 77.33), HSCT team density (indicates the number of transplant teams per 1 million inhabitants; r(2) = 76.28), human development index (r(2) = 74.36), and gross national income per capita (r(2) = 74.04) showed the highest associations with HSCT rates. Hematopoietic stem cell transplantation is used for a broad spectrum of indications worldwide, but most frequently in countries with higher gross national incomes, higher governmental health care expenditures, and higher team densities.