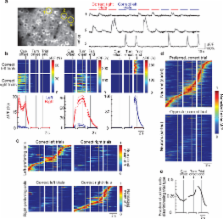 The posterior parietal cortex (PPC) plays an important role in many cognitive behaviors; however, the neural circuit dynamics underlying PPC function are not well understood. Here we optically imaged the spatial and temporal activity patterns of neuronal populations in mice performing a PPC-dependent task that combined a perceptual decision and memory-guided navigation in a virtual environment. Individual neurons had transient activation staggered relative to one another in time, forming a sequence of neuronal activation spanning the entire length of a task trial. Distinct sequences of neurons were triggered on trials with opposite behavioral choices and defined divergent, choice-specific trajectories through a state space of neuronal population activity. Cells participating in the different sequences and at distinct time points in the task were anatomically intermixed over microcircuit length scales (< 100 micrometers). During working memory decision tasks the PPC may therefore perform computations through sequence-based circuit dynamics, rather than long-lived stable states, implemented using anatomically intermingled microcircuits.

Daniel A Dombeck, Anton N Khabbaz, Forrest Collman … (2007)
We report a technique for two-photon fluorescence imaging with cellular resolution in awake, behaving mice with minimal motion artifact. The apparatus combines an upright, table-mounted two-photon microscope with a spherical treadmill consisting of a large, air-supported Styrofoam ball. Mice, with implanted cranial windows, are head restrained under the objective while their limbs rest on the ball's upper surface. Following adaptation to head restraint, mice maneuver on the spherical treadmill as their heads remain motionless. Image sequences demonstrate that running-associated brain motion is limited to approximately 2-5 microm. In addition, motion is predominantly in the focal plane, with little out-of-plane motion, making the application of a custom-designed Hidden-Markov-Model-based motion correction algorithm useful for postprocessing. Behaviorally correlated calcium transients from large neuronal and astrocytic populations were routinely measured, with an estimated motion-induced false positive error rate of <5%.

Kenichi Ohki, Sooyoung Chung, Yeang Ch'ng … (2005)
Neurons in the cerebral cortex are organized into anatomical columns, with ensembles of cells arranged from the surface to the white matter. Within a column, neurons often share functional properties, such as selectivity for stimulus orientation; columns with distinct properties, such as different preferred orientations, tile the cortical surface in orderly patterns. This functional architecture was discovered with the relatively sparse sampling of microelectrode recordings. Optical imaging of membrane voltage or metabolic activity elucidated the overall geometry of functional maps, but is averaged over many cells (resolution >100 microm). Consequently, the purity of functional domains and the precision of the borders between them could not be resolved. Here, we labelled thousands of neurons of the visual cortex with a calcium-sensitive indicator in vivo. We then imaged the activity of neuronal populations at single-cell resolution with two-photon microscopy up to a depth of 400 microm. In rat primary visual cortex, neurons had robust orientation selectivity but there was no discernible local structure; neighbouring neurons often responded to different orientations. In area 18 of cat visual cortex, functional maps were organized at a fine scale. Neurons with opposite preferences for stimulus direction were segregated with extraordinary spatial precision in three dimensions, with columnar borders one to two cells wide. These results indicate that cortical maps can be built with single-cell precision.

David Sussillo, L.F. Abbott (2009)
Neural circuits display complex activity patterns both spontaneously and when responding to a stimulus or generating a motor output. How are these two forms of activity related? We develop a procedure called FORCE learning for modifying synaptic strengths either external to or within a model neural network to change chaotic spontaneous activity into a wide variety of desired activity patterns. FORCE learning works even though the networks we train are spontaneously chaotic and we leave feedback loops intact and unclamped during learning. Using this approach, we construct networks that produce a wide variety of complex output patterns, input-output transformations that require memory, multiple outputs that can be switched by control inputs, and motor patterns matching human motion capture data. Our results reproduce data on premovement activity in motor and premotor cortex, and suggest that synaptic plasticity may be a more rapid and powerful modulator of network activity than generally appreciated.