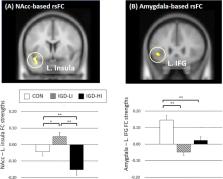 A Zigmond, R P Snaith (1983)
A self-assessment scale has been developed and found to be a reliable instrument for detecting states of depression and anxiety in the setting of an hospital medical outpatient clinic. The anxiety and depressive subscales are also valid measures of severity of the emotional disorder. It is suggested that the introduction of the scales into general hospital practice would facilitate the large task of detection and management of emotional disorder in patients under investigation and treatment in medical and surgical departments.

Jim Patton, Matthew S. Stanford, Ernest Barratt (1995)
The purpose of the present study was to revise the Barratt Impulsiveness Scale Version 10 (BIS-10), identify the factor structure of the items among normals, and compare their scores on the revised form (BIS-11) with psychiatric inpatients and prison inmates. The scale was administered to 412 college undergraduates, 248 psychiatric inpatients, and 73 male prison inmates. Exploratory principal components analysis of the items identified six primary factors and three second-order factors. The three second-order factors were labeled Attentional Impulsiveness, Motor Impulsiveness, and Nonplanning Impulsiveness. Two of the three second-order factors identified in the BIS-11 were consistent with those proposed by Barratt (1985), but no cognitive impulsiveness component was identified per se. The results of the present study suggest that the total score of the BIS-11 is an internally consistent measure of impulsiveness and has potential clinical utility for measuring impulsiveness among selected patient and inmate populations.

George F Koob, Nora D. Volkow (2010)
Drug addiction is a chronically relapsing disorder that has been characterized by (1) compulsion to seek and take the drug, (2) loss of control in limiting intake, and (3) emergence of a negative emotional state (eg, dysphoria, anxiety, irritability) reflecting a motivational withdrawal syndrome when access to the drug is prevented. Drug addiction has been conceptualized as a disorder that involves elements of both impulsivity and compulsivity that yield a composite addiction cycle composed of three stages: 'binge/intoxication', 'withdrawal/negative affect', and 'preoccupation/anticipation' (craving). Animal and human imaging studies have revealed discrete circuits that mediate the three stages of the addiction cycle with key elements of the ventral tegmental area and ventral striatum as a focal point for the binge/intoxication stage, a key role for the extended amygdala in the withdrawal/negative affect stage, and a key role in the preoccupation/anticipation stage for a widely distributed network involving the orbitofrontal cortex-dorsal striatum, prefrontal cortex, basolateral amygdala, hippocampus, and insula involved in craving and the cingulate gyrus, dorsolateral prefrontal, and inferior frontal cortices in disrupted inhibitory control. The transition to addiction involves neuroplasticity in all of these structures that may begin with changes in the mesolimbic dopamine system and a cascade of neuroadaptations from the ventral striatum to dorsal striatum and orbitofrontal cortex and eventually dysregulation of the prefrontal cortex, cingulate gyrus, and extended amygdala. The delineation of the neurocircuitry of the evolving stages of the addiction syndrome forms a heuristic basis for the search for the molecular, genetic, and neuropharmacological neuroadaptations that are key to vulnerability for developing and maintaining addiction.