Vitamin D deficiency is associated with the severity of COPD: a systematic review and meta-analysis 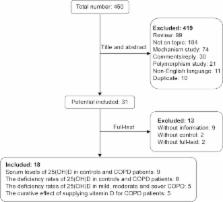 To explore the association between host serum 25-hydroxyvitamin D (25(OH)D) and the susceptibility and severity of COPD.

Previous studies on the association between host 25(OH)D and the susceptibility and severity of COPD were collected on the basis of a systematic literature search of PubMed and Web of Science up to June 2015. Continuous variable data were presented as standard mean difference (SMD) or weighted mean difference with 95% confidence interval (CI). The dichotomous variable data were analyzed as relative ratio (RR) or odds ratio with 95% CI for cohort and case-control studies. A systematic review was conducted to understand the curative and side effects of vitamin D intake.

Claudia Carremans,  Wim Janssens,  Jan Verhaegen … (2012)
Low serum 25-hydroxyvitamin D (25-[OH]D) levels have been associated with lower FEV(1), impaired immunologic control, and increased airway inflammation. Because many patients with chronic obstructive pulmonary disease (COPD) have vitamin D deficiency, effects of vitamin D supplementation may extend beyond preventing osteoporosis. To explore whether supplementation with high doses of vitamin D could reduce the incidence of COPD exacerbations. Randomized, single-center, double-blind, placebo-controlled trial. (ClinicalTrials.gov registration number: NCT00666367) University Hospitals Leuven, Leuven, Belgium. 182 patients with moderate to very severe COPD and a history of recent exacerbations. 100,000 IU of vitamin D supplementation or placebo every 4 weeks for 1 year. The primary outcome was time to first exacerbation. Secondary outcomes were exacerbation rate, time to first hospitalization, time to second exacerbation, FEV(1), quality of life, and death. Mean serum 25-(OH)D levels increased significantly in the vitamin D group compared with the placebo group (mean between-group difference, 30 ng/mL [95% CI, 27 to 33 ng/mL]; P < 0.001). The median time to first exacerbation did not significantly differ between the groups (hazard ratio, 1.1 [CI, 0.82 to 1.56]; P = 0.41), nor did exacerbation rates, FEV(1), hospitalization, quality of life, and death. However, a post hoc analysis in 30 participants with severe vitamin D deficiency (serum 25-[OH]D levels <10 ng/mL) at baseline showed a significant reduction in exacerbations in the vitamin D group (rate ratio, 0.57 [CI, 0.33 to 0.98]; P = 0.042). This was a single-center study with a small sample size. High-dose vitamin D supplementation in a sample of patients with COPD did not reduce the incidence of exacerbations. In participants with severe vitamin D deficiency at baseline, supplementation may reduce exacerbations. Applied Biomedical Research Program, Agency for Innovation by Science and Technology (IWT-TBM).