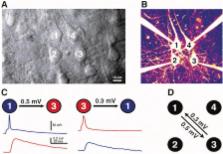 How different is local cortical circuitry from a random network? To answer this question, we probed synaptic connections with several hundred simultaneous quadruple whole-cell recordings from layer 5 pyramidal neurons in the rat visual cortex. Analysis of this dataset revealed several nonrandom features in synaptic connectivity. We confirmed previous reports that bidirectional connections are more common than expected in a random network. We found that several highly clustered three-neuron connectivity patterns are overrepresented, suggesting that connections tend to cluster together. We also analyzed synaptic connection strength as defined by the peak excitatory postsynaptic potential amplitude. We found that the distribution of synaptic connection strength differs significantly from the Poisson distribution and can be fitted by a lognormal distribution. Such a distribution has a heavier tail and implies that synaptic weight is concentrated among few synaptic connections. In addition, the strengths of synaptic connections sharing pre- or postsynaptic neurons are correlated, implying that strong connections are even more clustered than the weak ones. Therefore, the local cortical network structure can be viewed as a skeleton of stronger connections in a sea of weaker ones. Such a skeleton is likely to play an important role in network dynamics and should be investigated further.

Regulation of synaptic efficacy by coincidence of postsynaptic APs and EPSPs.

M Frotscher,  B. Sakmann,  J Lübke … (1997)
Activity-driven modifications in synaptic connections between neurons in the neocortex may occur during development and learning. In dual whole-cell voltage recordings from pyramidal neurons, the coincidence of postsynaptic action potentials (APs) and unitary excitatory postsynaptic potentials (EPSPs) was found to induce changes in EPSPs. Their average amplitudes were differentially up- or down-regulated, depending on the precise timing of postsynaptic APs relative to EPSPs. These observations suggest that APs propagating back into dendrites serve to modify single active synaptic connections, depending on the pattern of electrical activity in the pre- and postsynaptic neurons.

Emergence of scaling in random networks

Zoltan Barabasi,  Albert Donnay,  Albert Dionise … (1999)
Systems as diverse as genetic networks or the World Wide Web are best described as networks with complex topology. A common property of many large networks is that the vertex connectivities follow a scale-free power-law distribution. This feature was found to be a consequence of two generic mechanisms: (i) networks expand continuously by the addition of new vertices, and (ii) new vertices attach preferentially to sites that are already well connected. A model based on these two ingredients reproduces the observed stationary scale-free distributions, which indicates that the development of large networks is governed by robust self-organizing phenomena that go beyond the particulars of the individual systems.

Q Bi,  G Bi,  M Poo (1998)
In cultures of dissociated rat hippocampal neurons, persistent potentiation and depression of glutamatergic synapses were induced by correlated spiking of presynaptic and postsynaptic neurons. The relative timing between the presynaptic and postsynaptic spiking determined the direction and the extent of synaptic changes. Repetitive postsynaptic spiking within a time window of 20 msec after presynaptic activation resulted in long-term potentiation (LTP), whereas postsynaptic spiking within a window of 20 msec before the repetitive presynaptic activation led to long-term depression (LTD). Significant LTP occurred only at synapses with relatively low initial strength, whereas the extent of LTD did not show obvious dependence on the initial synaptic strength. Both LTP and LTD depended on the activation of NMDA receptors and were absent in cases in which the postsynaptic neurons were GABAergic in nature. Blockade of L-type calcium channels with nimodipine abolished the induction of LTD and reduced the extent of LTP. These results underscore the importance of precise spike timing, synaptic strength, and postsynaptic cell type in the activity-induced modification of central synapses and suggest that Hebb's rule may need to incorporate a quantitative consideration of spike timing that reflects the narrow and asymmetric window for the induction of synaptic modification.

DOI: 10.1371/journal.pbio.0030068
PMC ID: 1054880
PubMed ID: 15737062
Copyright statement: Copyright: © 2005 Song et al. This is an open-access article distributed under the terms of the Creative Commons Attribution License, which permits unrestricted use, distribution, and reproduction in any medium, provided the original work is properly cited