Libyan healthcare system during the armed conflict: Challenges and restoration 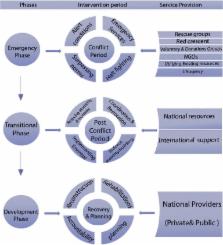 Loss, trauma, and human resilience: have we underestimated the human capacity to thrive after extremely aversive events?

George Bonanno (2004)
Many people are exposed to loss or potentially traumatic events at some point in their lives, and yet they continue to have positive emotional experiences and show only minor and transient disruptions in their ability to function. Unfortunately, because much of psychology's knowledge about how adults cope with loss or trauma has come from individuals who sought treatment or exhibited great distress, loss and trauma theorists have often viewed this type of resilience as either rare or pathological. The author challenges these assumptions by reviewing evidence that resilience represents a distinct trajectory from the process of recovery, that resilience in the face of loss or potential trauma is more common than is often believed, and that there are multiple and sometimes unexpected pathways to resilience. ((c) 2004 APA, all rights reserved)

Simon Hay,  Katherine Battle,  David M. Pigott … (2013)
The primary aim of this review was to evaluate the state of knowledge of the geographical distribution of all infectious diseases of clinical significance to humans. A systematic review was conducted to enumerate cartographic progress, with respect to the data available for mapping and the methods currently applied. The results helped define the minimum information requirements for mapping infectious disease occurrence, and a quantitative framework for assessing the mapping opportunities for all infectious diseases. This revealed that of 355 infectious diseases identified, 174 (49%) have a strong rationale for mapping and of these only 7 (4%) had been comprehensively mapped. A variety of ambitions, such as the quantification of the global burden of infectious disease, international biosurveillance, assessing the likelihood of infectious disease outbreaks and exploring the propensity for infectious disease evolution and emergence, are limited by these omissions. An overview of the factors hindering progress in disease cartography is provided. It is argued that rapid improvement in the landscape of infectious diseases mapping can be made by embracing non-conventional data sources, automation of geo-positioning and mapping procedures enabled by machine learning and information technology, respectively, in addition to harnessing labour of the volunteer ‘cognitive surplus’ through crowdsourcing.