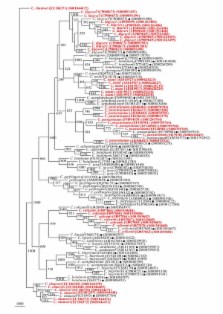 Bacterial taxonomy and phylogeny based on rrs (16S rDNA) sequencing is being vigorously pursued. In fact, it has been stated that novel biological findings are driven by comparison and integration of massive data sets. In spite of a large reservoir of rrs sequencing data of 1,237,963 entries, this analysis invariably needs supplementation with other genes. The need is to divide the genetic variability within a taxa or genus at their rrs phylogenetic boundaries and to discover those fundamental features, which will enable the bacteria to naturally fall within them. Within the large bacterial community, Clostridium represents a large genus of around 110 species of significant biotechnological and medical importance. Certain Clostridium strains produce some of the deadliest toxins, which cause heavy economic losses. We have targeted this genus because of its high genetic diversity, which does not allow accurate typing with the available molecular methods.

This integrated approach is quite sensitive and can be easily extended as a molecular tool for diagnostic and taxonomic identification of any microbe of importance to food industries and health services. Since rapid and correct identification allows quicker diagnosis and consequently treatment as well, it is likely to lead to reduction in economic losses and mortality rates.

Health care costs and mortality associated with nosocomial diarrhea due to Clostridium difficile.

R Tatusov,  J. Smith,  K Makarova … (2001)
The genome sequence of the solvent-producing bacterium Clostridium acetobutylicum ATCC 824 has been determined by the shotgun approach. The genome consists of a 3.94-Mb chromosome and a 192-kb megaplasmid that contains the majority of genes responsible for solvent production. Comparison of C. acetobutylicum to Bacillus subtilis reveals significant local conservation of gene order, which has not been seen in comparisons of other genomes with similar, or, in some cases closer, phylogenetic proximity. This conservation allows the prediction of many previously undetected operons in both bacteria. However, the C. acetobutylicum genome also contains a significant number of predicted operons that are shared with distantly related bacteria and archaea but not with B. subtilis. Phylogenetic analysis is compatible with the dissemination of such operons by horizontal transfer. The enzymes of the solventogenesis pathway and of the cellulosome of C. acetobutylicum comprise a new set of metabolic capacities not previously represented in the collection of complete genomes. These enzymes show a complex pattern of evolutionary affinities, emphasizing the role of lateral gene exchange in the evolution of the unique metabolic profile of the bacterium. Many of the sporulation genes identified in B. subtilis are missing in C. acetobutylicum, which suggests major differences in the sporulation process. Thus, comparative analysis reveals both significant conservation of the genome organization and pronounced differences in many systems that reflect unique adaptive strategies of the two gram-positive bacteria.