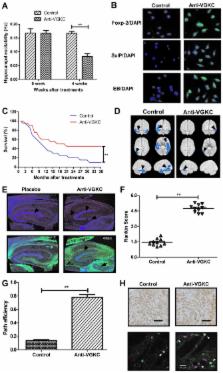 Epilepsy is a type of refractory neurologic disorder mental disease, which is associated with cognitive impairments and memory dysfunction. However, the potential mechanisms of epilepsy are not well understood. Previous evidence has identified the voltage gated potassium channel complex (VGKC) as a target in various cohorts of patients with epilepsy. In the present study, the efficacy of an antibody against VGKC (anti-VGKC) for the treatment of epilepsy in mice was investigated. A mouse model of lithium-pilocarpine temporal lobe epilepsy was established and anti-VGKC treatment was administered for 30 days. Memory impairment, anxiety, visual attention, inhibitory control and neuronal loss were measured in the mouse model of lithium-pilocarpine temporal lobe epilepsy. The results revealed that epileptic mice treated with anti-VGKC were able to learn the task and presented attention impairment, even a tendency toward impulsivity and compulsivity. It was also exhibited that anti-VGKC treatment decreased neuronal loss in structures classically associated with attentional performance in hippocampus. Mice who received Anti-VGKC treatment had inhibited motor seizures and hippocampal damage as compared with control mice. In conclusion, these results indicated that anti-VGKC treatment may present benefits for improvements of the condition of motor attention impairment and cognitive competence, which suggests that VGKC may be a potential target for the treatment of epilepsy.

Costas Michaelides,  O Rossetti,  Christiane Ruffieux … (2008)
Status epilepticus (SE) treatment ranges from small benzodiazepine doses to coma induction. For some SE subgroups, it is unclear how the risk of an aggressive therapeutic approach balances with outcome improvement. We recently developed a prognostic score (Status Epilepticus Severity Score, STESS), relying on four outcome predictors (age, history of seizures, seizure type and extent of consciousness impairment), determined before treatment institution. Our aim was to assess whether the score might have a role in the treatment strategy choice. This cohort study involved adult patients in three centers. For each patient, the STESS was calculated before primary outcome assessment: survival vs. death at discharge. Its ability to predict survival was estimated through the negative predictive value for mortality (NPV). Stratified odds ratios (OR) for mortality were calculated considering coma induction as exposure; strata were defined by the STESS level. In the observed 154 patients, the STESS had an excellent negative predictive value (0.97). A favorable STESS was highly related to survival (P < 0.001), and to return to baseline clinical condition in survivors (P < 0.001). The combined Mantel-Haenszel OR for mortality in patients stratified after coma induction and their STESS was 1.5 (95 % CI: 0.59-3.83). The STESS reliably identifies SE patients who will survive. Early aggressive treatment could not be routinely warranted in patients with a favorable STESS, who will almost certainly survive their SE episode. A randomized trial using this score would be needed to confirm this hypothesis.

Bethan Lang,  Mateusz Makuch,  Teresa Moloney … (2017)
Objectives Autoantibodies against the extracellular domains of the voltage-gated potassium channel (VGKC) complex proteins, leucine-rich glioma-inactivated 1 (LGI1) and contactin-associated protein-2 (CASPR2), are found in patients with limbic encephalitis, faciobrachial dystonic seizures, Morvan's syndrome and neuromyotonia. However, in routine testing, VGKC complex antibodies without LGI1 or CASPR2 reactivities (double-negative) are more common than LGI1 or CASPR2 specificities. Therefore, the target(s) and clinical associations of double-negative antibodies need to be determined. Methods Sera (n=1131) from several clinically defined cohorts were tested for IgG radioimmunoprecipitation of radioiodinated α-dendrotoxin (125I-αDTX)-labelled VGKC complexes from mammalian brain extracts. Positive samples were systematically tested for live hippocampal neuron reactivity, IgG precipitation of 125I-αDTX and 125I-αDTX-labelled Kv1 subunits, and by cell-based assays which expressed Kv1 subunits, LGI1 and CASPR2. Results VGKC complex antibodies were found in 162 of 1131 (14%) sera. 90 of these (56%) had antibodies targeting the extracellular domains of LGI1 or CASPR2. Of the remaining 72 double-negative sera, 10 (14%) immunoprecipitated 125I-αDTX itself, and 27 (38%) bound to solubilised co-expressed Kv1.1/1.2/1.6 subunits and/or Kv1.2 subunits alone, at levels proportionate to VGKC complex antibody levels (r=0.57, p=0.0017). The sera with LGI1 and CASPR2 antibodies immunoprecipitated neither preparation. None of the 27 Kv1-precipitating samples bound live hippocampal neurons or Kv1 extracellular domains, but 16 (59%) bound to permeabilised Kv1-expressing human embryonic kidney 293T cells. These intracellular Kv1 antibodies mainly associated with non-immune disease aetiologies, poor longitudinal clinical–serological correlations and a limited immunotherapy response. Conclusions Double-negative VGKC complex antibodies are often directed against cytosolic epitopes of Kv1 subunits and occasionally against non-mammalian αDTX. These antibodies should no longer be classified as neuronal-surface antibodies. They consequently lack pathogenic potential and do not in themselves support the use of immunotherapies.