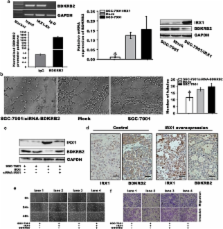 The overexpression of IRX1 gene correlates with the growth arrest in gastric cancer. Furthermore, overexpression of IRX1 gene suppresses peritoneal spreading and long distance metastasis. To explore the precise mechanisms, we investigated whether restoring IRX1 expression affects the angiogenesis or vasculogenic mimicry (VM). Human umbilical vein endothelial cells (HUVECs) and chick embryo and SGC-7901 gastric cancer cells were used for angiogenesis and VM analysis. Small interfering RNA was used for analyzing the function of BDKRB2, a downstream target gene of IRX1. As results, the remarkable suppression on peritoneal spreading and pulmonary metastasis of SGC-7901 cells by IRX1 transfectant correlates to reduced angiogenesis as well as VM formation. Using the supernatant from SGC-7901/ IRX1 cells, we found a strong inhibiting effect on angiogenesis both in vitro and in chick embryo. SGC-7901/ IRX1 cells revealed strong inhibiting effect on VM formation too. By gene-specific RNA interference for BDKRB2, or its effector PAK1, we got an effective inhibition on tube formation, cell proliferation, cell migration and invasion in vitro. In conclusion, enforcing IRX1 expression effectively suppresses peritoneal spreading and pulmonary metastasis via anti-angiogenesis and anti-VM mechanisms, in addition to previously found cell growth and invasion. BDKRB2 and its downstream effector might be potential targets for anti-cancer strategy.

Atsushi Masamune, Tooru Shimosegawa, K Kikuta … (2008)
Pancreatic cancer is characterized by excessive desmoplastic reaction and by a hypoxic microenvironment within the solid tumor mass. Chronic pancreatitis is also characterized by fibrosis and hypoxia. Fibroblasts in the area of fibrosis in these pathological settings are now recognized as activated pancreatic stellate cells (PSCs). Recent studies have suggested that a hypoxic environment concomitantly exists not only in pancreatic cancer cells but also in surrounding PSCs. This study aimed to clarify whether hypoxia affected the cell functions in PSCs. Human PSCs were isolated and cultured under normoxia (21% O(2)) or hypoxia (1% O(2)). We examined the effects of hypoxia and conditioned media of hypoxia-treated PSCs on cell functions in PSCs and in human umbilical vein endothelial cells. Hypoxia induced migration, type I collagen expression, and vascular endothelial growth factor (VEGF) production in PSCs. Conditioned media of hypoxia-treated PSCs induced migration of PSCs, which was inhibited by anti-VEGF antibody but not by antibody against hepatocyte growth factor. Conditioned media of hypoxia-treated PSCs induced endothelial cell proliferation, migration, and angiogenesis in vitro and in vivo. PSCs expressed several angiogenesis-regulating molecules including VEGF receptors, angiopoietin-1, and Tie-2. In conclusion, hypoxia induced profibrogenic and proangiogenic responses in PSCs. In addition to their established profibrogenic roles, PSCs might play proangiogenic roles during the development of pancreatic fibrosis, where they are subjected to hypoxia.

Karolien Castermans, Femke Hillen, Moritz A. Kirschmann … (2005)
A striking feature of Ewing sarcoma is the presence of blood lakes lined by tumor cells. The significance of these structures, if any, is unknown. Here, we report that the extent of blood lakes correlates with poor clinical outcomes, whereas variables of angiogenesis do not. We also show that Ewing sarcoma cells form vessel-like tubes in vitro and express genes associated with vasculogenic mimicry. In tumor models, we show that there is blood flow through the blood lakes, suggesting that these structures in Ewing sarcoma contribute to the circulation. Furthermore, we present evidence that reduced oxygen tension may be instrumental in tube formation by plastic tumor cells. The abundant presence of these vasculogenic structures, in contrast to other tumor types, makes Ewing sarcoma the ideal model system to study these phenomena. The results suggest that optimal tumor treatment may require targeting of these structures in combination with prevention of angiogenesis.