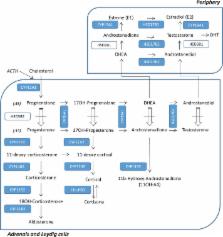 Human 3 beta-hydroxysteroid dehydrogenase deficiency (3b-HSD) is a very rare form of congenital adrenal hyperplasia resulting from HSD3B2 gene mutations. The estimated prevalence is less than 1/1,000,000 at birth. It leads to steroidogenesis impairment in both adrenals and gonads. Few data are available concerning adult testicular function in such patients. We had the opportunity to study gonadal axis and testicular function in a 46,XY adult patient, carrying a HSD3B2 mutation. He presented at birth a neonatal salt-wasting syndrome. He had a micropenis, a perineal hypospadias and two intrascrotal testes. HSD3B2 gene sequencing revealed a 687del27 homozygous mutation. The patient achieved normal puberty at the age of 15 years. Transition from the paediatric department occurred at the age of 19 years. His hormonal profile under hydrocortisone and fludrocortisone treatments revealed normal serum levels of 17OH-pregnenolone, as well as SDHEA, ACTH, total testosterone, inhibin B and AMH. Pelvic ultrasound identified two scrotal testes of 21 mL each, without any testicular adrenal rest tumours. His adult spermatic characteristics were normal, according to WHO 2010 criteria, with a sperm concentration of 57.6 million/mL ( N > 15), 21% of typical forms ( N > 4%). Sperm vitality was subnormal (41%; N > 58%). This patient, in contrast to previous reports, presents subnormal sperm parameters and therefore potential male fertility in a 24-years-old patient with severe 3b-HSD deficiency. This case should improve counselling about fertility of male patients carrying HSD3B2 mutation.

Predictors of outcome of long-term GnRH therapy in men with idiopathic hypogonadotropic hypogonadism.

Andrew A Dwyer,  Nelly Pitteloud,  Richard W Crowley … (2002)
GnRH treatment is successful in inducing virilization and spermatogenesis in men with idiopathic hypogonadotropic hypogonadism (IHH). However, a small subset of IHH men, poorly characterized to date, fail to reach a normal testicular volume (TV) and produce sperm on this therapy. To determine predictors of outcome in terms of TV and sperm count, we studied 76 IHH men (38% with anosmia) undergoing GnRH therapy for 12-24 months. The population was stratified according to the baseline degree of prior pubertal development: absent (group 1, n = 52), partial (group 2, n = 18), or complete (adult onset HH; group 3, n = 6). Cryptorchidism was recorded in 40% of group 1, 5% of group 2, and none in group 3. Pulsatile GnRH therapy was initiated at 5-25 ng/kg per pulse sc and titrated to attain normal adult male testosterone (T) levels. LH, FSH, T, and inhibin B (I(B)) levels were measured serially, and maximum sperm count was recorded. A longitudinal mixed effects model was used to determine predictors of final TV. LH (97%) and T (93%) levels were normalized in the majority of IHH men. Groups 2 and 3 achieved a normal adult testicular size (92%), FSH (96%), I(B) levels (93%), and sperm in their ejaculate (100%). However, given their prior complete puberty and thus primed gonadotropes and testes, group 3 responded faster, normalizing androgen production by 2 months and completing spermatogenesis by 6 months. In contrast, group 1 failed to normalize TV (11 +/- 0.4 ml) and I(B) levels (92 +/- 6 pg/ml) by 24 months, despite normalization of their FSH levels (11 +/- 2 IU/liter). Similarly, sperm counts of group 1 plateaued well below the normal range (median of 3 x 10(6)/ml) with 18% remaining azoospermic. The independent predictors of outcome of long-term GnRH therapy were: 1) the presence of some prior pubertal development (positive predictor; group effect (beta) = 4.3; P = 0.003); 2) a baseline I(B) less than 60 pg/ml (negative predictor; beta = -3.7; P = 0.009); and 3) prior cryptorchidism (negative predictor; beta = -1.8; P = 0.05). Notably, anosmia was not an independent predictor of outcome when adjusted for other baseline variables. Our conclusions are: 1) pulsatile GnRH therapy in IHH men is very successful in inducing androgen production and spermatogenesis; 2) normalization of the LH-Leydig cell-T axis is achieved more uniformly than the FSH-Sertoli cell-I(B) axis during GnRH therapy; and 3) favorable predictors for achieving an adult testicular size and consequently optimizing spermatogenesis are prior history of sexual maturation, a baseline I(B) greater than 60 pg/ml, and absence of cryptorchidism.

Baseline inhibin B and anti-Mullerian hormone measurements for diagnosis of hypogonadotropic hypogonadism (HH) in boys with delayed puberty.

Sébastien S. Dufresne,  Estelle Biette-Demeneix,  Frédérique Gatelais … (2010)
The diagnosis of isolated hypogonadotropic hypogonadism (IHH) in boys with delayed puberty is challenging, as may be the diagnosis of hypogonadotropic hypogonadism (HH) in boys with combined pituitary hormone deficiency (CPHD). Yet, the therapeutic choices for puberty induction depend on accurate diagnosis and may influence future fertility. The aim was to assess the utility of baseline inhibin B (INHB) and anti-Mullerian hormone (AMH) measurements to discriminate HH from constitutional delay of puberty (CDP). Both hormones are produced by Sertoli cells upon FSH stimulation. Moreover, prepubertal AMH levels are high as a reflection of Sertoli cell integrity. We studied 82 boys aged 14 to 18 yr with pubertal delay: 16 had IHH, 15 congenital HH within CPHD, and 51 CDP, as confirmed by follow-up. Subjects were genital stage 1 (testis volume<3 ml; 9 IHH, 7 CPHD, and 23 CDP) or early stage 2 (testis volume, 3-6 ml; 7 IHH, 8 CPHD, and 28 CDP). Age and testis volume were similar in the three groups. Compared with CDP subjects, IHH and CPHD subjects had lower INHB, testosterone, FSH, and LH concentrations (P<0.05), whereas AMH concentration was lower only in IHH and CPHD subjects with genital stage 1, likely reflecting a smaller pool of Sertoli cells in profound HH. In IHH and CPHD boys with genital stage 1, sensitivity and specificity were 100% for INHB concentration of 35 pg/ml or less. In IHH and CPHD boys with genital stage 2, sensitivities were 86 and 80%, whereas specificities were 92% and 88%, respectively, for an INHB concentration of 65 pg/ml or less. The performance of testosterone, AMH, FSH, and LH measurements was lower. No combination or ratio of hormones performed better than INHB alone. Discrimination of HH from CDP with baseline INHB measurement was excellent in subjects with genital stage 1 and fair in subjects with genital stage 2.

Claire Bouvattier,  Laure Esterle,  Peggy Renoult-Pierre … (2015)
Outcomes of congenital adrenal hyperplasia due to classic 21-hydroxylase deficiency (21OHD) have been widely studied in children and women, but less so in men.