Changes in sexual attitudes and lifestyles in Britain through the life course and over time: findings from the National Surveys of Sexual Attitudes and Lifestyles (Natsal) 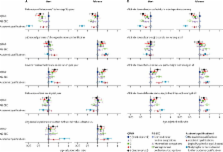 Sexual behaviour and relationships are key components of wellbeing and are affected by social norms, attitudes, and health. We present data on sexual behaviours and attitudes in Britain (England, Scotland, and Wales) from the three National Surveys of Sexual Attitudes and Lifestyles (Natsal).

We used a multistage, clustered, and stratified probability sample design. Within each of the 1727 sampled postcode sectors for Natsal-3, 30 or 36 addresses were randomly selected and then assigned to interviewers. To oversample individuals aged 16–34 years, we randomly allocated addresses to either the core sample (in which individuals aged 16–74 years were eligible) or the boost sample (in which only individuals aged 16–34 years were eligible). Interviewers visited all sampled addresses between Sept 6, 2010, and Aug 31, 2012, and randomly selected one eligible individual from each household to be invited to participate. Participants completed the survey in their own homes through computer-assisted face-to-face interviews and self-interview. We analysed data from this survey, weighted to account for unequal selection probabilities and non-response to correct for differences in sex, age group, and region according to 2011 Census figures. We then compared data from participants aged 16–44 years from Natsal-1 (1990–91), Natsal-2 (1999–2001), and Natsal-3.

Interviews were completed with 15 162 participants (6293 men, 8869 women) from 26 274 eligible addresses (57·7%). 82·1% (95% CI 81·0–83·1%) of men and 77·7% (76·7–78·7%) of women reported at least one sexual partner of the opposite sex in the past year. The proportion generally decreased with age, as did the range of sexual practices with partners of the opposite sex, especially in women. The increased sexual activity and diversity reported in Natsal-2 in individuals aged 16–44 years when compared with Natsal-1 has generally been sustained in Natsal-3, but in men has generally not risen further. However, in women, the number of male sexual partners over the lifetime (age-adjusted odds ratio 1·18, 95% CI 1·08–1·28), proportion reporting ever having had a sexual experience with genital contact with another woman (1·69, 1·43–2·00), and proportion reporting at least one female sexual partner in the past 5 years (2·00, 1·59–2·51) increased in Natsal-3 compared with Natsal-2. While reported number of occasions of heterosexual intercourse in the past 4 weeks had reduced since Natsal-2, we recorded an expansion of heterosexual repertoires—particularly in oral and anal sex—over time. Acceptance of same-sex partnerships and intolerance of non-exclusivity in marriage increased in men and women in Natsal-3.

Sexual lifestyles in Britain have changed substantially in the past 60 years, with changes in behaviour seeming greater in women than men. The continuation of sexual activity into later life—albeit reduced in range and frequency—emphasises that attention to sexual health and wellbeing is needed throughout the life course.

Michael Gideon Marmot (2005)
The gross inequalities in health that we see within and between countries present a challenge to the world. That there should be a spread of life expectancy of 48 years among countries and 20 years or more within countries is not inevitable. A burgeoning volume of research identifies social factors at the root of much of these inequalities in health. Social determinants are relevant to communicable and non-communicable disease alike. Health status, therefore, should be of concern to policy makers in every sector, not solely those involved in health policy. As a response to this global challenge, WHO is launching a Commission on Social Determinants of Health, which will review the evidence, raise societal debate, and recommend policies with the goal of improving health of the world's most vulnerable people. A major thrust of the Commission is turning public-health knowledge into political action.

Kaye Wellings,  Martine Collumbien,  Emma Slaymaker … (2006)
Research aimed at investigating sexual behaviour and assessing interventions to improve sexual health has increased in recent decades. The resulting data, despite regional differences in quantity and quality, provide a historically unique opportunity to describe patterns of sexual behaviour and their implications for attempts to protect sexual health at the beginning of the 21st century. In this paper we present original analyses of sexual behaviour data from 59 countries for which they were available. The data show substantial diversity in sexual behaviour by region and sex. No universal trend towards earlier sexual intercourse has occurred, but the shift towards later marriage in most countries has led to an increase in premarital sex, the prevalence of which is generally higher in developed countries than in developing countries, and is higher in men than in women. Monogamy is the dominant pattern everywhere, but having had two or more sexual partners in the past year is more common in men than in women, and reported rates are higher in industrialised than in non-industrialised countries. Condom use has increased in prevalence almost everywhere, but rates remain low in many developing countries. The huge regional variation indicates mainly social and economic determinants of sexual behaviour, which have implications for intervention. Although individual behaviour change is central to improving sexual health, efforts are also needed to address the broader determinants of sexual behaviour, particularly those that relate to the social context. The evidence from behavioural interventions is that no general approach to sexual-health promotion will work everywhere and no single-component intervention will work anywhere. Comprehensive behavioural interventions are needed that take account of the social context in mounting individual-level programmes, attempt to modify social norms to support uptake and maintenance of behaviour change, and tackle the structural factors that contribute to risky sexual behaviour.

Global perspectives on the sexual and reproductive health of adolescents: patterns, prevention, and potential.

Linda Bearinger,  Renee E Sieving,  Jane Ferguson … (2007)
Worldwide, societal shifts and behavioural patterns exacerbated by unique developmental vulnerabilities create a confluence of factors that place today's adolescents at heightened risks for poor health outcomes. Country-level data show that continued investment in effective prevention and treatment strategies is essential to protect adolescents' sexual and reproductive health. Whereas strategies must be tailored to the developmental needs of this age group and their social contexts, effective approaches are multifaceted. All adolescents need access to quality youth-friendly services provided by clinicians trained to work with this population. Sex education programmes should offer accurate, comprehensive information while building skills for negotiating sexual behaviours. Girls and boys also need equal access to youth development programmes that connect them with supportive adults and with educational and economic opportunities. Although progress has been made since the 1994 International Conference on Population and Development, adolescents continue to be disproportionately burdened by threats to their sexual and reproductive health.