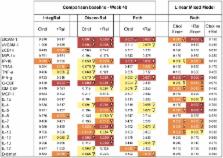 At baseline, different inflammatory markers were strongly associated with HCV co-infection, lower CD4 counts and with cART regimens (being higher in PI-treated individuals), but poorly correlated with detection of markers of residual viral replication. Although raltegravir intensification reduced inflammation in individuals with lower CD4 T-cell counts, no effect of intensification was observed on plasma markers of inflammation in a global analysis. An association was found, however, between reductions in immune activation and plasma levels of the coagulation marker D-dimer, which exclusively decreased in intensified patients on protease inhibitor (PI)-based cART regimens ( P = 0.040).

The inflammatory profile in treated HIV-infected individuals showed a complex association with HCV co-infection, the levels of CD4 T cells and the cART regimen. Raltegravir intensification specifically reduced D-dimer levels in PI-treated patients, highlighting the link between cART composition and residual viral replication; however, raltegravir had little effect on other inflammatory markers.

B. Gazzard,  Richard A. Phillips,  G Fätkenheuer … (2006)
Despite declines in morbidity and mortality with the use of combination antiretroviral therapy, its effectiveness is limited by adverse events, problems with adherence, and resistance of the human immunodeficiency virus (HIV). We randomly assigned persons infected with HIV who had a CD4+ cell count of more than 350 per cubic millimeter to the continuous use of antiretroviral therapy (the viral suppression group) or the episodic use of antiretroviral therapy (the drug conservation group). Episodic use involved the deferral of therapy until the CD4+ count decreased to less than 250 per cubic millimeter and then the use of therapy until the CD4+ count increased to more than 350 per cubic millimeter. The primary end point was the development of an opportunistic disease or death from any cause. An important secondary end point was major cardiovascular, renal, or hepatic disease. A total of 5472 participants (2720 assigned to drug conservation and 2752 to viral suppression) were followed for an average of 16 months before the protocol was modified for the drug conservation group. At baseline, the median and nadir CD4+ counts were 597 per cubic millimeter and 250 per cubic millimeter, respectively, and 71.7% of participants had plasma HIV RNA levels of 400 copies or less per milliliter. Opportunistic disease or death from any cause occurred in 120 participants (3.3 events per 100 person-years) in the drug conservation group and 47 participants (1.3 per 100 person-years) in the viral suppression group (hazard ratio for the drug conservation group vs. the viral suppression group, 2.6; 95% confidence interval [CI], 1.9 to 3.7; P<0.001). Hazard ratios for death from any cause and for major cardiovascular, renal, and hepatic disease were 1.8 (95% CI, 1.2 to 2.9; P=0.007) and 1.7 (95% CI, 1.1 to 2.5; P=0.009), respectively. Adjustment for the latest CD4+ count and HIV RNA level (as time-updated covariates) reduced the hazard ratio for the primary end point from 2.6 to 1.5 (95% CI, 1.0 to 2.1). Episodic antiretroviral therapy guided by the CD4+ count, as used in our study, significantly increased the risk of opportunistic disease or death from any cause, as compared with continuous antiretroviral therapy, largely as a consequence of lowering the CD4+ cell count and increasing the viral load. Episodic antiretroviral therapy does not reduce the risk of adverse events that have been associated with antiretroviral therapy. (ClinicalTrials.gov number, NCT00027352 [ClinicalTrials.gov].). Copyright 2006 Massachusetts Medical Society.

Inflammatory and Coagulation Biomarkers and Mortality in Patients with HIV Infection

S Deeks (2010)
Although antiretroviral therapy for HIV infection prevents AIDS-related complications and prolongs life, it does not fully restore health. Long-term treated patients remain at higher than expected risk for a number of complications typically associated with aging, including cardiovascular disease, cancer, osteoporosis, and other end-organ diseases. The potential effect of HIV on health is perhaps most clearly exhibited by a number of immunologic abnormalities that persist despite effective suppression of HIV replication. These changes are consistent with some of the changes to the adaptive immune system that are seen in the very old ("immunosenescence") and that are likely related in part to persistent inflammation. HIV-associated inflammation and immunosenescence have been implicated as causally related to the premature onset of other end-organ diseases. Novel therapeutic strategies aimed at preventing or reversing these immunologic defects may be necessary if HIV-infected patients are to achieve normal life span.

Competing Interests: BC, JB, JMP, JML, EN, MS and DDR have received fees for consultancy from BMS, GILEAD, ViiV or Jansen outside the submitted work. MSD grant 40527 (Principal Investigator JB) funded the project through the PI’s institution (IRSICAIXA). This does not alter the authors’ adherence to PLOS ONE policies on sharing data and materials.

This work was supported by HIVACAT program; the RD12/0017/0002 project as part of the Plan Nacional R + D + I cofinanced by Instituto de Salud Carlos III-Subdirección General de Evaluación y el Fondo Europeo de Desarrollo Regional (FEDER); the European Community's Seventh Framework Program (FP7/2007-2013) under the Project “Collaborative HIV and Anti-HIV Drug Resistance Network (CHAIN)” grant agreement n°223131, by the Department of Veterans Affairs, the UCSD Center for AIDS Research (P30 AI36214), the CARE Collaboratory (U19 AI096113) and the James B. Pendleton Charitable Trust and by an unrestricted grant from Merck Sharp & Dohme (MSD 40527). The funders had no role in study design, data collection and analysis, decision to publish, or preparation of the manuscript.

Data Availability The authors confirm that, for approved reasons, some access restrictions apply to the data underlying the findings. Data are part of two clinical trials. All relevant data shown in the manuscript and/or supporting information are available on request to researchers who meet the criteria for access to confidential data. Please contact the Trial Monitor Roser Escrig ( rescrig@ 123456flsida.org ) or alternatively the Hospital Germans Trias i Pujol Ethics Committee ( http://www.ceicgermanstrias.cat) to request data.
Data availability:
ScienceOpen disciplines: Uncategorized