Discovery and identification of O, O-diethyl O-(4-(5-phenyl-4, 5-dihydroisoxazol-3-yl) phenyl) phosphorothioate (XP-1408) as a novel mode of action of organophosphorus insecticides 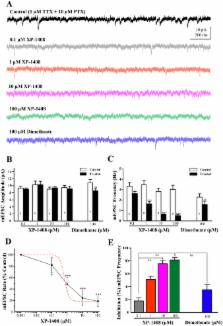 Organophosphorus (OP) insecticides play an important role in pest control. Many OP insecticides have been removed from the market because of their high toxicity to humans. We designed and synthesized a new OP insecticide with the goal of providing a low cost, and less toxic insecticide. The mode of action of O, O-diethyl O-(4-(5-phenyl-4, 5-dihydroisoxazol-3-yl) phenyl) phosphorothioate (XP-1408) was studied in Drosophila melanogaster. Bioassays showed that XP-1408 at a concentration of 50 mg/L delayed larval development. Molecular docking into Drosophila acetylcholinesterase (AChE) and voltage-gated sodium channels suggested that XP-1408 fitted into their active sites and could be inhibitory. Whole-cell patch clamp recordings indicated that XP-1408 exhibited synergistic effects involving the inhibition of cholinergic synaptic transmission and blockage of voltage-gated potassium (K v) channels and sodium (Na v) channels. In conclusion, the multiple actions of XP-1408 rendered it as a lead compound for formulating OP insecticides with a novel mode of action.

Bernard W. T. Coetzee,  B. Rudy,  D Lau … (1999)
K+ channel principal subunits are by far the largest and most diverse of the ion channels. This diversity originates partly from the large number of genes coding for K+ channel principal subunits, but also from other processes such as alternative splicing, generating multiple mRNA transcripts from a single gene, heteromeric assembly of different principal subunits, as well as possible RNA editing and posttranslational modifications. In this chapter, we attempt to give an overview (mostly in tabular format) of the different genes coding for K+ channel principal and accessory subunits and their genealogical relationships. We discuss the possible correlation of different principal subunits with native K+ channels, the biophysical and pharmacological properties of channels formed when principal subunits are expressed in heterologous expression systems, and their patterns of tissue expression. In addition, we devote a section to describing how diversity of K+ channels can be conferred by heteromultimer formation, accessory subunits, alternative splicing, RNA editing and posttranslational modifications. We trust that this collection of facts will be of use to those attempting to compare the properties of new subunits to the properties of others already known or to those interested in a comparison between native channels and cloned candidates.

Overview of molecular relationships in the voltage-gated ion channel superfamily.