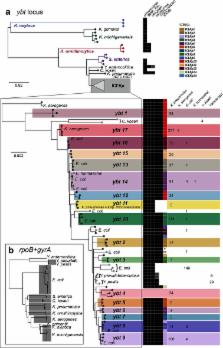 Mobile genetic elements (MGEs) that frequently transfer within and between bacterial species play a critical role in bacterial evolution, and often carry key accessory genes that associate with a bacteria’s ability to cause disease. MGEs carrying antimicrobial resistance (AMR) and/or virulence determinants are common in the opportunistic pathogen Klebsiella pneumoniae, which is a leading cause of highly drug-resistant infections in hospitals. Well-characterised virulence determinants in K. pneumoniae include the polyketide synthesis loci ybt and clb (also known as pks), encoding the iron-scavenging siderophore yersiniabactin and genotoxin colibactin, respectively. These loci are located within an MGE called ICE Kp, which is the most common virulence-associated MGE of K. pneumoniae, providing a mechanism for these virulence factors to spread within the population. Here we apply population genomics to investigate the prevalence, evolution and mobility of ybt and clb in K. pneumoniae populations through comparative analysis of 2498 whole-genome sequences. The ybt locus was detected in 40 % of K. pneumoniae genomes, particularly amongst those associated with invasive infections. We identified 17 distinct ybt lineages and 3 clb lineages, each associated with one of 14 different structural variants of ICE Kp. Comparison with the wider population of the family Enterobacteriaceae revealed occasional ICE Kp acquisition by other members. The clb locus was present in 14 % of all K. pneumoniae and 38.4 % of ybt+ genomes. Hundreds of independent ICE Kp integration events were detected affecting hundreds of phylogenetically distinct K. pneumoniae lineages, including at least 19 in the globally-disseminated carbapenem-resistant clone CG258. A novel plasmid-encoded form of ybt was also identified, representing a new mechanism for ybt dispersal in K. pneumoniae populations. These data indicate that MGEs carrying ybt and clb circulate freely in the K. pneumoniae population, including among multidrug-resistant strains, and should be considered a target for genomic surveillance along with AMR determinants.

The neutrophil lipocalin NGAL is a bacteriostatic agent that interferes with siderophore-mediated iron acquisition.

David Goetz,  Margaret Holmes,  Niels Borregaard … (2002)
First identified as a neutrophil granule component, neutrophil gelatinase-associated lipocalin (NGAL; also called human neutrophil lipocalin, 24p3, uterocalin, or neu-related lipocalin) is a member of the lipocalin family of binding proteins. Putative NGAL ligands, including neutrophil chemotactic agents such as N-formylated tripeptides, have all been refuted by recent biochemical and structural results. NGAL has subsequently been implicated in diverse cellular processes, but without a characterized ligand, the molecular basis of these functions remained mysterious. Here we report that NGAL tightly binds bacterial catecholate-type ferric siderophores through a cyclically permuted, hybrid electrostatic/cation-pi interaction and is a potent bacteriostatic agent in iron-limiting conditions. We therefore propose that NGAL participates in the antibacterial iron depletion strategy of the innate immune system.

M Maiden,  Martin Maiden (2005)
Multilocus sequence typing (MLST) was proposed in 1998 as a portable, universal, and definitive method for characterizing bacteria, using the human pathogen Neisseria meningitidis as an example. In addition to providing a standardized approach to data collection, by examining the nucleotide sequences of multiple loci encoding housekeeping genes, or fragments of them, MLST data are made freely available over the Internet to ensure that a uniform nomenclature is readily available to all those interested in categorizing bacteria. At the time of writing, over thirty MLST schemes have been published and made available on the Internet, mostly for pathogenic bacteria, although there are schemes for pathogenic fungi and some nonpathogenic bacteria. MLST data have been employed in epidemiological investigations of various scales and in studies of the population biology, pathogenicity, and evolution of bacteria. The increasing speed and reduced cost of nucleotide sequence determination, together with improved web-based databases and analysis tools, present the prospect of increasingly wide application of MLST.

Aurora García-Fernández,  Alessandra Carattoli,  Laura Villa … (2010)
IncF plasmids are frequently encountered in clinical enterobacterial strains associated with the dissemination of relevant antimicrobial resistance and virulence genes. These plasmids are usually heterogeneous in size and carry multiple replicons, and technical difficulties can impair the comparison and detection of related plasmids by restriction fragment length polymorphism analysis. We devised a rapid sequence-based typing scheme to categorize the members of this plasmid family into homogeneous groups. We compared the available IncF replicon sequences, identifying the combination of the different IncF replicon alleles as the discriminating characteristic of these plasmid scaffolds. An IncF typing method based on PCR amplification and sequence typing of the IncF replicons was devised. A collection of IncF plasmids carrying resistance and/or virulence genes, identified in strains from different sources and geographical origins, was tested with this typing system. We devised a replicon sequence typing (RST) scheme discriminating IncF plasmid variants. This system was tested on the collection of IncF plasmids, demonstrating that it was useful for the discrimination of plasmids carrying the same resistance gene (i.e. the bla(CTX-M-15) gene), but also recognized strictly related virulence plasmids (i.e. IncFIme plasmids). The PCR-based replicon typing (PBRT) system was also updated by including new primer pairs to allow the identification of the Salmonella, Klebsiella and Yersinia IncF plasmids. The ability to recognize and sub-categorize IncF plasmids by RST in homogeneous groups on the basis of their phylogenetic relatedness can be helpful in analysing their distribution in nature and discovering their evolutionary origin.