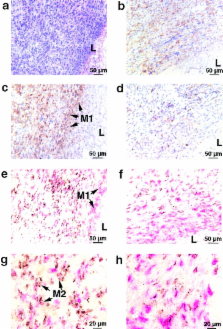 Branch points and flexures in the high pressure arterial system have long been recognized as sites of unusually high turbulence and consequent stress in humans are foci for atherosclerotic lesions. We show that mice that are homozygous for a null mutation in the gene encoding an endogenous antiinflammatory cytokine, interleukin 1 receptor antagonist (IL-1ra), develop lethal arterial inflammation involving branch points and flexures of the aorta and its primary and secondary branches. We observe massive transmural infiltration of neutrophils, macrophages, and CD4 + T cells. Animals appear to die from vessel wall collapse, stenosis, and organ infarction or from hemorrhage from ruptured aneurysms. Heterozygotes do not die from arteritis within a year of birth but do develop small lesions, which suggests that a reduced level of IL-1ra is insufficient to fully control inflammation in arteries. Our results demonstrate a surprisingly specific role for IL-1ra in the control of spontaneous inflammation in constitutively stressed artery walls, suggesting that expression of IL-1 is likely to have a significant role in signaling artery wall damage.

Reiko Horai,  Masahide Asano,  Katsuko Sudo … (1998)
Interleukin (IL)-1 is a major mediator of inflammation and exerts pleiotropic effects on the neuro-immuno-endocrine system. To elucidate pathophysiological roles of IL-1, we have first produced IL-1α/β doubly deficient (KO) mice together with mice deficient in either the IL-1α, IL-1β, or IL-1 receptor antagonist (IL-1ra) genes. These mice were born healthy, and their growth was normal except for IL-1ra KO mice, which showed growth retardation after weaning. Fever development upon injection with turpentine was suppressed in IL-1β as well as IL-1α/β KO mice, but not in IL-1α KO mice, whereas IL-1ra KO mice showed an elevated response. At this time, expression of IL-1β mRNA in the diencephalon decreased 1.5-fold in IL-1α KO mice, whereas expression of IL-1α mRNA decreased >30-fold in IL-1β KO mice, suggesting mutual induction between IL-1α and IL-1β. This mutual induction was also suggested in peritoneal macrophages stimulated with lipopolysaccharide in vitro. In IL-1β KO mice treated with turpentine, the induction of cyclooxygenase-2 (EC 1.14.99.1) in the diencephalon was suppressed, whereas it was enhanced in IL-1ra KO mice. We also found that glucocorticoid induction 8 h after turpentine treatment was suppressed in IL-1β but not IL-1α KO mice. These observations suggest that IL-1β but not IL-1α is crucial in febrile and neuro-immuno-endocrine responses, and that this is because IL-1α expression in the brain is dependent on IL-1β. The importance of IL-1ra both in normal physiology and under stress is also suggested.

Phenotypic and functional characterization of mice that lack the type I receptor for IL-1.