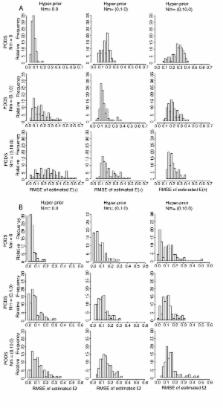 MTML-msBayes uses hierarchical approximate Bayesian computation (HABC) under a coalescent model to infer temporal patterns of divergence and gene flow across codistributed taxon-pairs. Under a model of multiple codistributed taxa that diverge into taxon-pairs with subsequent gene flow or isolation, one can estimate hyper-parameters that quantify the mean and variability in divergence times or test models of migration and isolation. The software uses multi-locus DNA sequence data collected from multiple taxon-pairs and allows variation across taxa in demographic parameters as well as heterogeneity in DNA mutation rates across loci. The method also allows a flexible sampling scheme: different numbers of loci of varying length can be sampled from different taxon-pairs.

Simulation tests reveal increasing power with increasing numbers of loci when attempting to distinguish temporal congruence from incongruence in divergence times across taxon-pairs. These results are robust to DNA mutation rate heterogeneity. Estimating mean divergence times and testing simultaneous divergence was less accurate with migration, but improved if one specified the correct migration model. Simulation validation tests demonstrated that one can detect the correct migration or isolation model with high probability, and that this HABC model testing procedure was greatly improved by incorporating a summary statistic originally developed for this task (Wakeley's Ψ W ). The method is applied to an empirical data set of three Australian avian taxon-pairs and a result of simultaneous divergence with some subsequent gene flow is inferred.

To retain flexibility and compatibility with existing bioinformatics tools, MTML-msBayes is a pipeline software package consisting of Perl, C and R programs that are executed via the command line. Source code and binaries are available for download at http://msbayes.sourceforge.net/ under an open source license (GNU Public License).

H Kishino, T Yano, M. Hasegawa (1984)
A new statistical method for estimating divergence dates of species from DNA sequence data by a molecular clock approach is developed. This method takes into account effectively the information contained in a set of DNA sequence data. The molecular clock of mitochondrial DNA (mtDNA) was calibrated by setting the date of divergence between primates and ungulates at the Cretaceous-Tertiary boundary (65 million years ago), when the extinction of dinosaurs occurred. A generalized least-squares method was applied in fitting a model to mtDNA sequence data, and the clock gave dates of 92.3 +/- 11.7, 13.3 +/- 1.5, 10.9 +/- 1.2, 3.7 +/- 0.6, and 2.7 +/- 0.6 million years ago (where the second of each pair of numbers is the standard deviation) for the separation of mouse, gibbon, orangutan, gorilla, and chimpanzee, respectively, from the line leading to humans. Although there is some uncertainty in the clock, this dating may pose a problem for the widely believed hypothesis that the pipedal creature Australopithecus afarensis, which lived some 3.7 million years ago at Laetoli in Tanzania and at Hadar in Ethiopia, was ancestral to man and evolved after the human-ape splitting. Another likelier possibility is that mtDNA was transferred through hybridization between a proto-human and a proto-chimpanzee after the former had developed bipedalism.