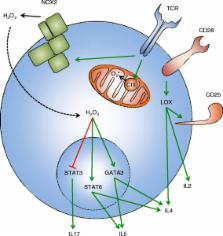 Reactive oxygen species (ROS) have been long considered simply as harmful by-products of metabolism, which damage cellular proteins, lipids, and nucleic acids. ROS are also known as a weapon of phagocytes, employed against pathogens invading the host. However, during the last decade, an understanding has emerged that ROS also have important roles as signaling messengers in a multitude of pathways, in all cells, tissues, and organs. T lymphocytes are the key players of the adaptive immune response, which both coordinate other immune cells and destroy malignant and virus-infected cells. ROS have been extensively implicated in T-cell hyporesponsiveness, apoptosis, and activation. It has also become evident that the source, the kinetics, and the localization of ROS production all influence cell responses. Thus, the characterization of the precise mechanisms by which ROS are involved in the regulation of T-cell functions is important for our understanding of the immune response and for the development of new therapeutic treatments against immune-mediated diseases. This review summarizes the 30-year-long history of research on ROS in T lymphocytes, with the emphasis on the physiological roles of ROS.

M. Toledano,  B. D’Autreaux (2007)
Reactive oxygen species (ROS) have been shown to be toxic but also function as signalling molecules. This biological paradox underlies mechanisms that are important for the integrity and fitness of living organisms and their ageing. The pathways that regulate ROS homeostasis are crucial for mitigating the toxicity of ROS and provide strong evidence about specificity in ROS signalling. By taking advantage of the chemistry of ROS, highly specific mechanisms have evolved that form the basis of oxidant scavenging and ROS signalling systems.

Jian-Dong Li,  Ye-Lin Shao,  Bi-Chang Chen … (2015)
Super-resolution fluorescence microscopy is distinct among nanoscale imaging tools in its ability to image protein dynamics in living cells. Structured illumination microscopy (SIM) stands out in this regard because of its high speed and low illumination intensities, but typically offers only a twofold resolution gain. We extended the resolution of live-cell SIM through two approaches: ultrahigh numerical aperture SIM at 84-nanometer lateral resolution for more than 100 multicolor frames, and nonlinear SIM with patterned activation at 45- to 62-nanometer resolution for approximately 20 to 40 frames. We applied these approaches to image dynamics near the plasma membrane of spatially resolved assemblies of clathrin and caveolin, Rab5a in early endosomes, and α-actinin, often in relationship to cortical actin. In addition, we examined mitochondria, actin, and the Golgi apparatus dynamics in three dimensions.

Agnes Görlach,  Peter Klappa,  Thomas Kietzmann (2015)
The endoplasmic reticulum (ER) plays a major role in regulating synthesis, folding, and orderly transport of proteins. It is also essentially involved in various cellular signaling processes, primarily by its function as a dynamic Ca(2+) store. Compared to the cytosol, oxidizing conditions are found in the ER that allow oxidation of cysteine residues in nascent polypeptide chains to form intramolecular disulfide bonds. However, compounds and enzymes such as PDI that catalyze disulfide bonds become reduced and have to be reoxidized for further catalytic cycles. A number of enzymes, among them products of the ERO1 gene, appear to provide oxidizing equivalents, and oxygen appears to be the final oxidant in aerobic living organisms. Thus, protein oxidation in the ER is connected with generation of reactive oxygen species (ROS). Changes in the redox state and the presence of ROS also affect the Ca(2+) homeostasis by modulating the functionality of ER-based channels and buffering chaperones. In addition, a close relationship exists between oxidative stress and ER stress, which both may activate signaling events leading to a rebalance of folding capacity and folding demand or to cell death. Thus, redox homeostasis appears to be a prerequisite for proper functioning of the ER.