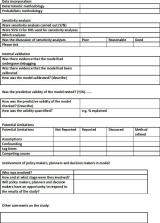 New insights into the immunology of chronic obstructive pulmonary disease.

Not 15 but 50% of smokers develop COPD?--Report from the Obstructive Lung Disease in Northern Sweden Studies.

Kara M. Lindstrom,  L Larsson,  E Rönmark … (2003)
The prevalence of chronic obstructive pulmonary disease (COPD) according to guidelines of today seems considerably higher than has been reported also in recent literature. To estimate the prevalence of COPD as defined by British Thoracic Society (BTS) criteria and the recent global initiative for chronic obstructive lung disease (GOLD) criteria. Further aims were to assess the proportion of underdiagnosis and of symptoms in subjects with COPD, and to study risk factors for COPD. In 1996, 5892 of the Obstructive Lung Disease in Northern Sweden (OLIN) Study's first cohort could be traced to a third follow-up survey, and 5189 completed responses (88%) were received corresponding to 79% of the original cohort from December 1985. Of the responders, a random sample of 1500 subjects were invited to a structured interview and a lung function test, and 1237 of the invited completed a lung function test with acceptable quality. In ages >45 years, the prevalence of COPD according to the BTS guidelines was 8%, while it was 14% according to the GOLD criteria. The absolutely dominating risk factors were increasing age and smoking, and approximately a half of elderly smokers fulfilled the criteria for COPD according to both the BTS and the GOLD criteria. Family history of obstructive airway disease was also a risk factor, while gender was not. Of those fulfilling the BTS criteria for COPD, 94% were symptomatics, 69% had chronic productive cough, but only 31% had prior to the study been diagnosed as having either chronic bronchitis, emphysema, or COPD. The corresponding figures for COPD according GOLD were 88, 51, and 18%. In ages >45 years, the prevalence of COPD according to the BTS guidelines was 8%, and it was 14% according to the GOLD criteria. Fifty percent of elderly smokers had developed COPD. The large majority of subjects having COPD were symptomatic, while the proportion of those diagnosed as having COPD or similar diagnoses was small.

SM drafted the article with oversight from CS SW and AS. AS and SM conceived the project as part of SM's PhD.