Risk of hip fracture in patients on dialysis or kidney transplant: a meta-analysis of 14 cohort studies 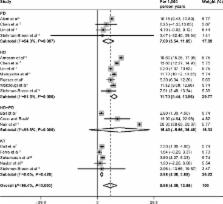 We aimed to conduct a meta-analysis of published cohort studies to evaluate the risk of hip fracture in patients undergoing dialysis or kidney transplantation (KT).

We identified relevant studies by searching PubMed, EMBASE and Google Scholar databases from their inception to December 31, 2017. Cohort studies evaluating risk of hip fractures in patients undergoing dialysis or KT were considered included. The methodological quality of the cohort studies was assessed using the modified Newcastle-Ottawa scale.

Hip fractures in the elderly: a world-wide projection.

Carole G. Campion,  L. Joseph Melton,  Edward C. Cooper (1992)
Hip fractures are recognized to be a major public health problem in many Western nations, most notably those in North America, Europe and Oceania. Incidence rates for hip fracture in other parts of the world are generally lower than those reported for these predominantly Caucasian populations, and this has led to the belief that osteoporosis represents less of a problem to the nations of Asia, South American and Africa. Demographic changes in the next 60 years, however, will lead to huge increases in the elderly populations of those countries. We have applied available incidence rates for hip fracture from various parts of the world to projected populations in 1990, 2025 and 2050 in order to estimate the numbers of hip fractures which might occur in each of the major continental regions. The projections indicate that the number of hip fractures occurring in the world each year will rise from 1.66 million in 1990 to 6.26 million by 2050. While Europe and North America account for about half of all hip fractures among elderly people today, this proportion will fall to around one quarter in 2050, by which time steep increases will be observed throughout Asia and Latin America. The results suggest that osteoporosis will truly become a global problem over the next half century, and that preventive strategies will be required in parts of the world where they are not currently felt to be necessary.

R. Braithwaite,  N Col,  John B. Wong (2003)
To estimate lifetime morbidity, mortality, and costs from hip fracture incorporating the effect of deficits in activities of daily living. Markov computer cohort simulation considering short- and long-term outcomes attributable to hip fractures. Data estimates were based on published literature, and costs were based primarily on Medicare reimbursement rates. Postacute hospital facility. Eighty-year-old community dwellers with hip fractures. Life expectancy, nursing facility days, and costs. Hip fracture reduced life expectancy by 1.8 years or 25% compared with an age- and sex-matched general population. About 17% of remaining life was spent in a nursing facility. The lifetime attributable cost of hip fracture was $81,300, of which nearly half (44%) related to nursing facility expenses. The development of deficits in ADLs after hip fracture resulted in substantial morbidity, mortality, and costs. Hip fractures result in significant mortality, morbidity, and costs. The estimated lifetime cost for all hip fractures in the United States in 1997 likely exceeded $20 billion. These results emphasize the importance of current and future interventions to decrease the incidence of hip fracture.